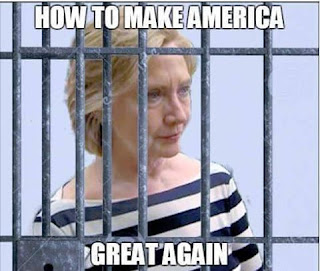 
The wheels may be coming off of the Democrat Party, and the mafia-style politics of the Clintons and Obamas.  Your sin will always find you out.

The Department of Justice announced late Thursday night it has lifted a gag order on an FBI informant with first hand knowledge of the Uranium One deal that personally benefited Bill and Hillary Clinton.

The informant, whose identity will not be revealed, will be allowed to speak to the Senate Judiciary Committee and others on Capitol Hill investigating the situation.

“As of tonight, the Department of Justice has authorized the informant to disclose to the Chairmen and Ranking Members of the Senate Committee on the Judiciary, the House Committee on Oversight and Government Reform, and the House Permanent Select Committee on Intelligence, as well as one member of each of their staffs, any information or documents he has concerning alleged corruption or bribery involving transactions in the uranium market, including but not limited to anything related to Vadim Mikerin, Rosatom, Tenex, Uranium One, or the Clinton Foundation,” DOJ official Ian Prior released in a statement.

The lifting of the gag order comes after an explosive investigative report from The Hill showed the Clintons were made richer by Russian nuclear officials after Hillary Clinton helped to approve a deal giving the Kremlin 20 percent of U.S. uranium supply.

A former FBI informant who blew the whistle on a high-profile bribery case involving a Russian energy company was intimidated by Obama administration lawyers into dropping a civil suit against the government last year, his attorney says.

Victoria Toensing, the lawyer for the informant, told The Daily Caller’s Vince Coglianese that Obama Justice Department lawyers told her client that “his reputation and liberty [was] in jeopardy” if he did not drop a lawsuit against the government.

All of this is important because it turns out, according to the FBI, The Democratic National Committee and Hillary Clinton’s presidential campaign helped pay for opposition research that resulted in the salacious intelligence dossier that contained allegations about Donald Trump’s connections to Russia.

Sarah Huckabee Sanders, the current White House press secretary said it best, indicating that "the real collusion" with Russia was between the Clintons and the Democratic National Committee.

"I think that this further proves if there was anyone that was colluding with the Russians to influence the election look no further than the Clintons and the DNC. Hypocrisy at the highest level and a new low in politics. Everything the Clinton campaign and DNC were falsely accusing the president of doing the past year they were doing it themselves," Sanders said Thursday.

-- Political Pistachio Conservative News and Commentary
Posted by Douglas V. Gibbs at 4:58 AM