It's All About Destroying Trump 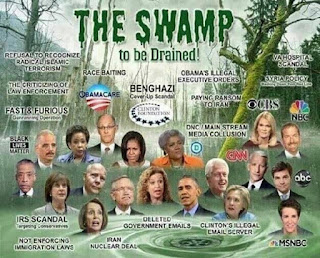 Paul Manafort is looking at 80 years in prison for doing things that had nothing to do with Trump's campaign, and something Donald J. Trump knew nothing about.  That's the best the Democrats could pull out of their jackass after well over a year of investigating their claim of collusion between the Trump campaign team and Vladimir Putin's Russia. . . who suddenly became the enemy in 2016 after a century of coddling by the Democrats for the previous century.  Special Counsel Robert Mueller is a part of the Clinton mafia, and was a part of the Obama presidency list of crazies, and he's the one doing the investigating.  Then, in an attempt to cover up any possible headlines that show wonderful things coming out of the Trump Presidency, such as an economy exceeding all expectations, or that the ISIS caliphate is crumbling, Mueller leaked to CNN over the weekend that on Monday, the day preceding Halloween 2017, there would be an indictment.  The Democrats and their uninformed communist supporting minions hung on the edge of their seats with baited breath.  "Who would it be?"

From the Democrat's point of view, everyone is guilty.  They just know it, because a bunch of leftist politicians known for lying said so.  Trump is the enemy, they are foaming at the mouth, and he must be destroyed.  He is an enemy of the state.  Why?  Because he dared to run as a republican and beat their beloved favorite Marxist, Hillary Clinton - the inevitable heir to the White House throne if it hadn't been for the meddling of those darn billionaire Trump people.

The moment it looked like Trump had a chance to make a dent in the Democrat Party's aristocracy, they mobilized their troops.  A couple years ago, as the Trump faithful were chanting "lock her up," the leftist media was doing all they could to cover-up information regarding Uranium One and the treason against America by the Clintons and the Obamas (and the rest of the Democrat Party, for that matter), hiring a firm of researchers called Fusion GPS to dig as deep as possible into the history of the personal and professional life of Donald J. Trump.  It was time to take him out for good.

The best they could do is find a quick snippet of Trump in a guy-moment saying something about grabbing a woman's body part that's below the belt and above the thighs.  The supporters of Hillary Clinton, who's married to a rapist and pedophile and was impeached as President of the United States for lying about it, and whose closest aid has a husband going around with his phone showing people what an Anthony Weiner really looks like, screamed, "See?  Trump is a woman hating misogynist!"

The Never Trump movement rose up, riots emerged, violence in the streets erupted, all because the lemmings heard the liars of the Democrat Party scream about Trump, and they believed them.

No evidence of collusion ever surfaced, but the Democrats hate Trump for daring to call himself a republican, so, therefore, the mobs in the streets must hate him, as well.

The people that weren't prone to easy manipulation and running into the streets to burn things, however, were fully aware of what was going on.  The Americans who weren't foolish enough to fall for the lies of known liars rushed to the polls, and elected Donald J. Trump, despite the attacks, and despite the media telling everyone on every media outlet that Hillary Clinton was the heir apparent and it was inevitable she would win the presidency.

Nonetheless, the cash continued to flow from the DNC, Obama's minions, and the Clinton Campaign to try and stop Trump.  Fusion GPS got rich, the Democrats engaged their law firm of Perkins Coie into the game, who brought into the madness a British spy, Christopher Steele, to do more digging. . . and they still could not find any semblance of any connections between Trump and Russia.

So they began making stuff up.  If any of the made-up crap could be proven, it would destroy Trump.  That's how it works in America, right?  Government makes a bunch of crap up about you, because they are sure some of it must be true because nobody is blameless, and then they go out to prove that their lies resemble the truth in one way or another. . . even if it doesn't.

So they dragged out accusations of prostitutes at a Moscow hotel, that the Kremlin was blackmailing him, anything to make it look like Trump was the treasonous bastard they said he was.  None of it stuck, none of it was true, but hopefully enough voters would believe the lies and pull the level for Hillary Clinton.

A 35-page dossier was produced, full of unproven garbage, but the Democrats swore it was full of allegations that could bring down The Donald.  Who cares if it was full of “unsubstantiated and salacious allegations,” all that mattered was that enough voters would believe it and either vote for Hillary, or refuse to vote for Trump.

Then, acting as if the dossier was true, the Democrats went into action.  The Obama administration used the information from the dossier to justify unmasking the names of Trump officials who had been picked up on legitimate electronic intercepts.  Then, when asked about the connection to hiring a British spy to do the dirty work, the Democrats lied about it.  Before a Senate Intelligence Committee, Clinton campaign chair John Podesta and DNC chair Debbie Wasserman Schultz claimed they did not know that the Democrat Party's law firm, Perkins Coie, had enlisted Fusion GPA or the British spy to dig up dirt on Trump, and then like Hillary Clinton, they began deleting emails and hiding their servers.

The whole world, it seemed, was in play, working against Trump, and the Democrats were sure nobody was the wiser.  The liberal media was pounding the "Trump is a traitor engaged in Russian collusion" drum, the Hillary Clinton campaign was massaging the message, the Democrat Party leadership was slamming Trump with the same message, a British spy was snooping up each of Trump's pants legs, members of Russian intelligence was feeding them lies they believed, and the FBI was using their deep state operatives to lie and prod and needle.  They all worked in secret, receiving a boatload of secret money, working with the scum of the political world, all to destroy Trump because he dared to appeal to the people and speak out against the corruption of the political establishment deeply embedded in the corridors of our once constitutional republic.

All to protect their aristocracy and destruction of the U.S. Constitution.   All of this to stop a candidate outside the system, a person who refuses to be bought and be manipulated by the political establishment.  He said he was going to drain the swamp, and the swamp fought back, and lost the election.  Now, with Manafort's indictment, they think they finally have done it.  After over a year of unfolding their plan, they think they have Trump.  But as they try to make their lies sound like the truth, the FBI has been releasing the real truth about the Democrat Party's lies - and the jackasses are denying all of it.

All it comes down to now is if the Republicans have enough intestinal fortitude to pull the trigger.  Is the GOP with We the People and the Constitution, or is the Republican Party leadership with continuing to feed the establishment machine with lies, ill-gotten money, and a wave of cultural Marxism that calls itself progressivism?  Will we finally make America great again?  Will Hillary Clinton finally be explaining what happened from behind bars?  Or, will the Democrat Party's lies remove Trump, and place us back on an Orwellian path of their making?

-- Political Pistachio Conservative News and Commentary
Posted by Douglas V. Gibbs at 9:06 AM