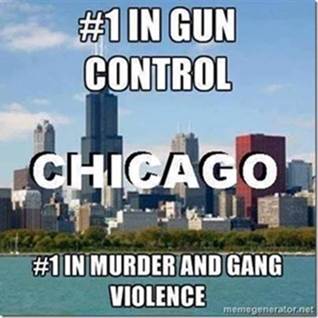 "We must reject the idea that every time a law's broken, society is guilty rather than the lawbreaker. It is time to restore the American precept that each individual is accountable for his actions." - Ronald Reagan

Did you notice how quickly the liberal left Democrats rallied with their calls for more gun control?  The students, while still emotional about what happened, were mobilized instantly.

The mass shooting at Marjory Stoneman Douglas High School in Parkland, Florida by Nikolas Cruz, from the viewpoint of the Democrats, couldn't have occurred at a better time.

They needed a distraction.  They needed a battle cry.  Despite what the media is telling you, the Democrats are in trouble in 2018 . . . and 2020 if they don't get DACA and amnesty.

But, what did you expect?  The younger generation has been victims, so they are ready to march in the streets to cry about their victimhood on a moment's notice.

The culture of victimhood was birthed on our campuses, be it public schools, or college campuses.  Supreme Court Justice Clarence Thomas recently addressed the phenomenon, telling an audience he's no fan of the victimhood culture roiling today’s college campuses.

Thomas told the crowd that he’d recently visited a college campus in Kansas where a black student told him that she was more focused on completing her studies than embroiling herself in the political frenzy that so many campuses have played host to. This, to Thomas, was a good thing to hear.

“At some point,” he said, “we’re going to be fatigued with everybody being a victim.”

Noting that he did not grow up in the best of circumstances, he praised his family for making the most of what they had. “You always have to play the hand you’re dealt,” he said. “If you’re dealt a bad hand, you still have to play it.”

While everyone, including conservative and republican pundits and political hacks, are calling for the federal government to do something - to pass some law that will make sure the Nikolas Cruz wannabes of the world can't get their hands on an AR-15, which is pretty much the same as my hunting rifle, plus a few cosmetic additions that make it look scary to liberals, my first thought is "NOOOOOOO!"  Do these people not understand what "shall not be infringed" means?  It is none of the federal government's business.  I don't want us giving the federal government any authority over our guns.  They are already acting unconstitutionally.  It is dangerous to give the greatest threat ro our right to keep and bear arms the authority to limit or obstruct our access to our right to guns.

I am not saying that anyone at anytime should be able to buy a gun.  I am saying that if laws must exist, they need to be passed at the State level.  Background checks, age limitations, and the so forth are good to a certain point, but every State is different and must be the ones to construct the laws that are more appropriate for their unique culture.  That said, I live in California, and trust me, I am not happy with my State of California and their tyrannical grip on my gun rights in the Golden State.  But, if I have a problem with that, then we must work to change it, or move to a State that better fits what I want.  If the federal government completes its tyrannical anti-gun agenda, there will be no place else to go.

Do you want to stop school shootings?  Arm the teachers, and bring in armed security.  Conceal the guns, but make sure that good guys are carrying guns.  Don't let anyone know who is armed, and who isn't.  Just make it public that armed personnel are on campus.  Shooters usually don't want to be shot at, first of all, so just knowing they will be surrounded by armed personnel should they try something on campus will cut down these situations greatly.  Second, if a perpetrator does start shooting, a good guy with a gun response will stop it before the death toll goes nuts - rather than waiting for whatever time it takes for cops with guns to arrive on the scene.

While I hear the kids scream "This isn't about the GOP. This isn't about the Democrats. This is about us creating a badge of shame for any politicians who are accepting money from the NRA and using us as collateral," understand not only does the NRA not seek to control politicians with any political monetary gifts, but not a single one of any mass shooter killing people by mowing them down with guns have been members of the National Rifle Association.  In fact, not a single one of them was a conservative Republican, either.

Did you hear that?  None of the shooters had anything to do with the NRA!!!

This is not about guns, the NRA, or politics . . . it's about the fact that in our world we have people who kill.

Added note: If you wish to stop drunk driving, is the best way to accomplish your goal to take away the cars of law-abiding drivers?  Will banning big and scary SUVs reduce the risk of drunk drivers on the road?

Killers kill because they kill

Besides, if guns were banned, and the NRA silenced, it would simply make the world worse.  Criminals break the law.  They will get guns no matter what.  There will be black markets moving guns underground, getting guns into the hands of people who mean to harm others.  If you increase gun control, you have done nothing to stop the next shooting, but you have made it harder for law-abiding people to defend themselves if the need arises.

Opening the Door to Evil

It seems that there was sufficient cause for police or FBI to take action.
Of all the suggestions and input at President Trump's "Listening" session,
There is one thing that I didn't hear anyone talk about; Putting God back
into the public schools. What about God in the Home? Kids are growing
up without Godly morals and principles to guide them. The influence of
the entertainment industry and computer games that devalue life and
promote killing is desensitizing our children. Then we wonder why a child
would even think to do such a thing. Is America going to be another sad
statistic in the history books. History shows that the average life time of
a nation is 200 to 250 years. Do you know what made this nation so Great
and the most powerful in such a short time? All we have to do is look at
History and the founding principles of this country. Our United States
Constitution was created based on Judaeo-Christian principles.