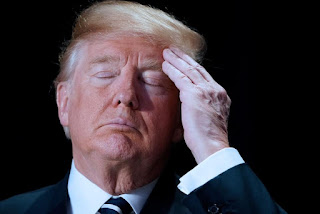 First of all, when we talk about the Omnibus Bill that really shouldn't have been signed by President Trump, let's understand something -  It was written by the establishment . . . Democrats and Republicans alike.  Only the Tea Party Freedom Caucus stood against it.  Trump had been putting sticks in the spokes of the establishment machine, and they finally became desperate, and presented the monstrosity of an omnibus bill (rather than a budget) with the timing and language that could not be responded to in any way without it being a disaster for Trump.  Veto it?  The government shuts down, and the blame would be squarely on him.  Sign it?  The establishment gets most of its pet programs and leftist garbage paid for.

That said, I am not sure the Omnibus Bill is necessarily the disaster everyone thinks it is.

First, let me set a stage of Constitutional Originalism, first.  This idea of packing everything into a single monstrosity of a bill is not even close to what was originally intended by the Constitution, or the Framers who wrote it, in 1787.  Then again, neither was internal expenditures.

In Article I., Section 4 of the U.S. Constitution it states that Congress must meet at least once per year.  During the convention there were actually those who argued that once per year was too often.  The same argument came up during the ratification conventions.  Congress's authorities did not include any internal issues.  Those all belonged to the States.  Unless the country was at war, or needed legislation regarding trade with other nations, or for Congress to write legislation to mediate a dispute between the States, the Congressmen were not really needed in Washington D.C.

Fast-forward more than 200 years, and not only is 85% of federal spending unconstitutional, but the myriad of quivering tentacles of federal intrusion are weaving their way throughout our States and local systems.  They, the critters in Washington D.C., concern themselves with everything, and when someone like me says it is unconstitutional, they scream "case law," or "it's a living and breathing document."

Internal issues are none of their business . . . but over the years, they've made it their business, and complaining they are acting unconstitutionally is like screaming at a brick wall that it wasn't supposed to be built where it's at.  Fact is, the wall is there, as is our unconstitutional governmental machinery, and neither are going to be moved in the right direction anytime soon.

Original intent gave no power of discretion regarding spending to the Executive, save perhaps in regards to how to maneuver military spending, especially if a case of waging war is in place.  The power of the purse-strings belong to the House of Representatives.  Congress must decide where the money is to be spent.

That once proud world of a constitutional republic, however, has given way to a liberal democracy with rules and procedures that would be completely foreign to the senses and minds of the Founding Fathers.

The rules have changed, and now those are the rules we, and President Trump, must play by.

While, constitutionally, the President has no leeway when it comes to how a budget is spent, or any federal spending is spent, because Congress earmarks every little dollar (or, at least they are supposed to), based on today's congressional rules, according to the people inside the bubble, there is a difference between an omnibus bill and a budget.

Again, as the Constitution Guy, I cringe at these rules that don't have any constitutional allowance.

What we are being told is that what Trump signed the other day was an omnibus bill, not a Budget.

According to today's rules, the rules that are a little different from what the Constitution demands, from what I am being told, if it's an omnibus spending bill, the president can ignore the instructions that come with it . . . you know, because it's not a budget.  Obama ignored them.  He spent the money, or didn’t spend it, as he desired.  He did whatever he wanted to do.  Congress didn’t do a thing about it.  They couldn't . . . because it was an omnibus bill, not a budget.

So, the question is, after foolishly signing the omnibus bill, will President Trump do the same thing, and refuse to spend the funds the way the Democrats want him to, and when everyone complains about him not following the instructions, claim that precedent was set by Obama, and then spend the money, or don't spend the money, as he pleases?

Are the appropriations in an omnibus bill mere suggestions that can be ignored?

Can Trump decide not to send money to Planned Parenthood?

Can he move money around to make sure the wall gets paid for, and sanctuary cities are removed from the list of cities receiving federal funds?

Sure, it's unconstitutional to spend, or not spend, outside the rules the Congress establishes in a budget . . . but we are told this isn't a budget, and so like Obama, Trump can do as he pleases with it.

What's the left going to do?  Demand that Trump follow different rules than what Obama followed?

The omnibus was designed to screw Trump.  They did it in such a way that if he vetoed it, or didn't, either way he would look bad.  And, the House Members didn’t receive the bill until the last moment, with a matter of hours to read it . . . which means it wasn't read by any of them.

Now, the Never-Trump crowd is yelling, "Ah-ha!  See!  We told you so!  Trump's in cahoots with the Democrats!"

So far, Donald Trump has been more conservative than even Ronald Reagan at this point in his presidency.  I believe Trump when he said he didn't want to sign the bill, but he felt he had to for the military.  But, one wonders . . . is he going to do what Obama did?  Not that, as a constitutionalist, I want to see an executive acting in such a manner when the Constitution says it's a no-no, but it would be interesting to watch if Trump pulls a whammy on these guys, and refuses to fund what he doesn't want funded, and moves the money around, and then when they scream he's acting unlawfully, pulls the "but Obama set the precedent" card.

I won't hold my breath on that one, but you never know.

Yeah, I'm with Rand Paul on this one.  The omnibus on the surface feels like a betrayal.  We wanted the wall funded.  We wanted the military funded (the only thing we seemed to get).  We wanted sanctuary cities and Planned Parenthood defunded.

It's not good.  The omnibus is a betrayal in many ways.

It definitely revealed to voters who the Republicans who need to be removed are.

Oh, and one last thing.  Was President Trump really filled with angst as he reluctantly signed the omnibus bill?  Was he outraged by the process?  Was he being honest when he said he'll never do this again?


I would like to think so.  I desperately want him to do the right thing, and be the president I think he wants to be.

He should have vetoed the bill.  But, I am not convinced that by signing it he confirmed any of the ridiculousness the Never-Trump conservatives claim it proved.

One thing it did prove was that the establishment Republicans are not in Trump's corner.  They are the ones who joined the Democrats in creating such a horrible bill and putting him into a position of damned-if-you-do-damned-if-you-don't.

Trump had the establishment on the ropes, and suddenly with this bill they struck back hard.  They want Trump's supporters to be angry with him, to abandon him, so they laid the track to make it happen.  I don't believe it's a good idea to run from Trump. That's what the establishment is trying to get us to do.  They are baiting us.  We need to be as tough as Trump has been.  We need to stand by our President . . . but, at the same time, he needs to know he's only allowed a couple mulligans on his score card.

Or, was the president aware of what the Faux Republicans were doing and went along with it knowing full well he was going to spend the money the way he promised during his campaign?

In other words, did he play Congress?

Is he going to "slow play" some of that money or maybe move it to other uses?

Only time will tell and I think those of us who support this president will end up very pleased.