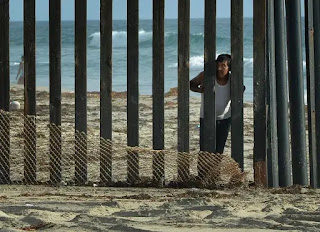 Proponents of an open border and providing protections for illegal aliens use the 4th Amendment and the 14th Amendment to argue their case.

Amendment 4 was written to protect individuals from unreasonable searches and seizures.

Amendment 14, or at least the part the folks supporting illegal aliens are referring to, provides that people will be treated equally under the law, and that they will not be deprived of life, liberty or property without due process of law.

Let's add Article IV., Section 2 where it states that citizens will be entitled to all Privileges and Immunities of citizens of the several States.

Since illegal aliens are not citizens, they are not entitled to receive the immunities and privileges of citizenship as laid out per Article 4, therefore, the two amendments in question technically do not apply to them.  However, as a reasonable society we give them that courtesy, anyway.

So, we must ask, since we are going to provide them constitutional protections anyway, are the searches and seizures associated with enforcing immigration law reasonable, and are the illegal aliens being treated equally under the law and receiving the due process of law they allegedly deserve?

In the case of illegal entry into the United States, among the penalties that may be applied, based on various factors such as if they are a repeat offender (first illegal crossing is a misdemeanor, all subsequent crossings are felonies), among the penalties of that crime is deportation. Each offender is given their day in court, and after provided due process of the law, if they are found guilty of the crime of crossing the border illegally, they are deported. Therefore, the argument that illegal aliens are not afforded due process is a false argument.

The 14th Amendment says that people are to be treated equally under the law. If that is the case and they broke the law by crossing the border illegally then a part of being treated equally under the law is that if they are found guilty of breaking federal law by entering the country without going through the legal processes in place for immigration, they must also be punished accordingly under the law. A law was broken. They are Federal Fugitives. Regardless of who you are if you are a federal fugitive who has broken federal law, and found guilty of crossing the border illegally, the consequence is deportation.  There is no unequal treatment under the law.  Consequences are always supposed to accompany criminal activity.

As for the 4th Amendment's concern about unreasonable searches, since the illegal alien has broken federal law, a search and seizure of their personal property is warranted.  Any judge should issue a search warrant if a person is guilty of illegal entry into the United States because that person, or persons, broke federal law.  If any other law was broken a search warrant would be issued, so why should the breaking of a federal law regarding immigration be any different?

Therefore, the arguments provided by the liberal left associated with the 4th and 14th Amendments are false arguments, and do not follow the letter of the law.  They are trying to manipulate the language of those Amendments by assuming that illegal entry into the United States is somehow not a crime.  However, if the premise is changed, and illegal entry is indeed a crime, their argument falls apart with no foundation in law.