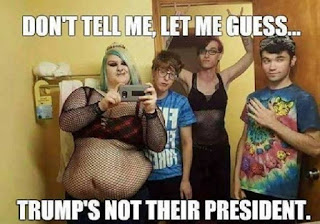 The world is angry because President Donald Trump has decided the parasites inhabiting the liberal left progressive socialist community (domestically, and globally) should not be able to suck off of America's prosperity anymore.  If the progressive model continues, the United States will be sucked dry, and a global dark ages with totalitarian global authoritarian control would be next.

Protecting our rights has become fashionable, again.  Property rights suddenly matter.  Republicans are scrambling because being a part of the establishment is now something that Trump Republicans don't do . . . and a wave of Trump Republicans with a more conservative view and a strong stance of putting up with nobody's B.S. is on the rise and poised to dominate in November.  People are sick of the deviant nature of the Democrat Party, from sexual immorality, to outrageous behavior that borders on treasonous all the way down to the FBI.  While we are being told racism is running amok, surveys and reports are telling us that the claim of systemic racism in America, especially when it comes to our local cops, is just not true.  It's a manufactured crisis by a party of liberal lefties who needs chaos running out of control so that they can sell their un-American snake-oil agenda.

Leftist messaging is making them lose.  Hollywood is leading the charge, and the message that America sucks, and that anyone who opposes the Democrats are "bigoted, warlike, stupid, planet hating, cause of all oppression, tormentors of the marginalized and responsible for past evils" simply alienates a large portion of the population . . . a portion of the population that was large enough to vote into office Donald J. Trump.

Eventually, people get sick of being called "racist," and sick of being accused of destroying the planet.  If you are patriotic you are being called a moron.  The liberals are angry because you believe in America, and you don't want to pay for their abortions and condoms.

Meanwhile, while President Trump, the businessman president, has the economy roaring, is reorganizing government to make it run efficiently, is working to keep this country protected by disallowing the enemy from simply walking into the country (and the Supreme Court recently upheld that decision), and is solidifying the conservative majority on the Supreme Court, the Democrats are scrambling to support child abuse in the form of transgenderism for children, are calling on the taxpayers to also pay for their living expenses, and are constantly reminding us that they believe illegal aliens deserve more government aid and support than our military veterans.

What in the hell are the Democrats thinking?

Well, it's good for conservatives, constitutionalists, and Trump supporters because all the Democrats are doing is securing that not only will there not be a blue wave in November, but that the Republicans will gain a stronger foothold in the United States Congress.

They are socialists, and it's not good for America, and a large swath of Americans realize that. . .


-- Political Pistachio Conservative News and Commentary
Posted by Douglas V. Gibbs at 1:08 AM