First Amendment and Keeping the Republic 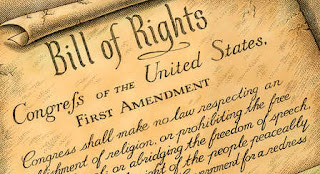 Most groups I address when I public speak cannot tell me the five natural rights that are enumerated in the First Amendment to the U.S. Constitution.  Never mind knowing that our rights are God-given, and that the government's job regarding our rights is to secure those rights rather than guarantee or protect them.

The rights enumerated in the First Amendment are:

1. Religion
2. Speech
3. Press
4. Assembly
5. Petition the Government for a redress of grievances

The amendment begins with the words "Congress shall make no law."  The language tells us that the federal government, through their law-making legislature we call the United States Congress, may not get involved in any way with religion, speech, the press, assembly, or our ability to petition the government for a redress of grievances.

Not only shall the federal government not use the law to create an established church, but they may not make any law that interferes with our free exercise of our Faith.

When it comes to speech, the specific types of speech being addressed were religious speech and political speech.  Modern concepts like political correctness, and safe spaces, would appall the Founding Fathers.  The cultural stance of questioning and seeking to silence "offensive" political and religious speech stands in direct opposition of what was originally intended by the Framers of the Constitution when it comes to free speech.

During the Founding Era the newspapers were very opinionated to the point that the various publications were associated with the various parties or political affiliations.  Some papers were called "republican," "federalist," or even "anti-federalist."  False reporting, or "fake news," was considered to be such a concern that at one point, during the John Adams administration (the only Federalist Party presidency), a "sedition" law was passed that would arrest and fine those who were critical of the White House.  Thomas Jefferson was incensed by the sedition law, for it stood in direct opposition of what the First Amendment was all about, and it was unconstitutional.

Freedom of the press extends beyond journalists, and their colleagues.  It also includes us, which includes things like letters to the editor.  Congress may not make any law regarding the content put out by the press, or by us through the press.  John Adams was wrong sign Congress's sedition laws of that time period, and the liberal left today is wrong to do what they can to suppress religious and political speech of which they believe opposes their ideology.

Assembly allows persons to gather, be it in protest, or in gatherings such as at a pub, community hall, church, TEA Party meeting, or Republican Club meeting.  Congress shall make no law disallowing peaceful assembly, but sometimes it seems like the liberal left would love nothing more to send shock troops in to break up TEA Party meetings, religious gatherings (especially if they are teaching sexual morality), and any other conservative gathering or rally.  The violence committed at Trump rallies comes to mind.

Finally, there is the right to petition the government for a redress of grievances.  That means more than merely filing some paperwork to tell the government that you don't like what they are doing.  That includes, and is not limited to, building relationships with our representatives.  Getting to know them.  Influencing their work.  I once had lunch with a democrat representative, not as much to influence his voting tendencies, but to collect intel about one of his GOP colleagues.  Democrats, after all, love to talk about Republicans if they think it's not good for said Republicans.  Ask the appropriate questions and you will be surprised how open your representatives, even the lefties, are willing to be.

The five rights enumerated in the First Amendment also spells out clearly the strategies we are supposed to use to keep the republic*.

1. Religion: It means we should constantly be in prayer.
2. Speech: We need to be speaking out.
3. Press: Spread the word using all of the tools available to us, including letters to the editor.
4. Assembly: Meet with like-minded individuals, and plan-out the next move.
5. Petition: Be active.  Be activists.  Make sure the representatives know who you are.

But, if for some reason the tools enumerated in the First Amendment are not successful . . . then we move to the Second Amendment.

* Keep the Republic.  Elizabeth Powel asked Benjamin Franklin, after the conclusion of the Constitutional Convention, "Dr., what have you given us, a monarchy, or a republic,"  He replied, "A republic, ma'am, if you can keep it."