You Climate Change What You Eat 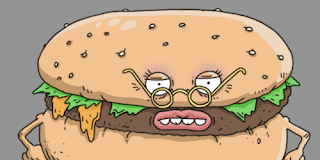 First of all, let's clear the air for those who are still confused.  I am not a climate change denier.  I believe the climate changes.  It has for the life of this planet.  However, I believe those changes are natural and cyclical.  In our brief history in the universe this planet has been much cooler and much hotter, thanks to various factors, most of which are associated with the sun.

Imagine that.  The sun is the culprit making us warmer.

While I do believe human activity can influence local climate, and it is good to be good stewards of the planet, I do not believe that man-made climate change is the "we need to run to socialism" emergency that the political left is claiming.  Besides, if they wish to be influential on the worst planetary polluters, the United States should not even be on their list.  China is the top notch polluter, followed by India, and a whole list of countries before the U.S. even shows up on the list.

That said, the problem is that the liberal left has created such a hysteria about "man-made climate change" and the worries that our coastlines will be under water any day now (Gore's deadlines have already passed, and Alexandria Ocasio-Cortez says within a decade) that they are going into crazy scenario ideas on what they believe is necessary to save the planet.  We have heard them say that we need to reduce the population (how do you do that without mass genocide?), control cow farts, outlaw eating meat, outlaw driving cars, outlaw industry (as they text on their phones), and reduce carbon emissions (so why did 51 leaders fly in 51 airplanes lately to attend a global climate change conference?).

The "if we don't do anything the seas will rise and flood coastal cities" argument is especially fascinating since many of the loudest voices in the climate change community have homes, or are buying homes, on the coasts of their beloved homelands ... you know, right up against those rising seas.  Barack Obama, in fact, just bought a home in Martha's Vineyard in Massachusetts after spending an entire presidency arguing that the seas are rising, and he's got a wall around the place after spending his post-presidency arguing that walls don't work.

So, to save the planet we are riding bikes more, eating less meat more, and we're making all of our homes and businesses as environmentally friendly as we can.  We are bending over backwards to reduce the size of our carbon footprint (carbon dioxide, I might add, is that stuff in the air that plant life uses to convert into oxygen), as China and India belches smoke into the sky.

Some climate change fear-mongerers have gone so far off their rocker that all of those methods of saving the planet is now no longer good enough.  One Swedish scientist is now suggesting that if we wish to make an impact on the climate change crisis, we need to now resort to cannibalism.

Breitbart reports, "Swedish behavioural scientist Magnus Söderlund has suggested that eating other people after they die could be a means of combatting climate change.  The scientist mentioned the possibility of cannibalism during a broadcast on Swedish television channel TV4 this week about a fair in Stockholm regarding 'food of the future'.  Söderlund is set to hold seminars at the event, entitled 'Gastro Summit — about the future of food' where he intends to discuss the possibility of eating people in the name of cutting down greenhouse emissions.  According to his research, the main problem with the idea is the widespread taboo of eating human flesh and said that conservative attitudes could make it hard to convince Swedes at large to take up the practice of cannibalism."

He then suggested, since cannibalism is such a taboo, that "lab-grown clean human meat" could be the way to go.

Of course, in this topsy-turvy world, if someone doesn't identify as being human, for them it wouldn't be technically cannibalism, right?

Of course, I suppose it could be worse ...