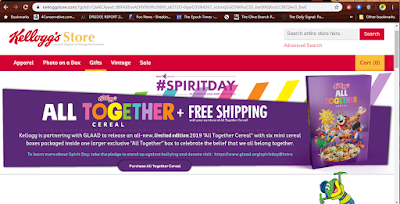 Thanks, but no thanks.

The Kellogg's Cereal Company has taken sides in the gay agenda debate with a new "All Together" cereal.  It's a private company, they can do what they want, but I hope the sale of this product is bad so that they get the message that Americans don't appreciate the drive by the liberal left and homosexual community to push America in a direction that they are not necessarily willing to go.

Let me qualify something real quick, here, because the liberal left pro-gay response will now be that I am homophobic, and a hater.

I don't hate anyone.  I believe homosexuality is a sin, and a dangerous behavior that often leads to serious negative consequences.  I do not believe the law should dictate to someone if they are allowed to be gay or not, but I have a problem that the homosexual agenda is trying to use the force of law, and cultural games and societal pressure to demand that everyone celebrate and accept as normal homosexual behavior, regardless of what we may think inside.  The wonderful thing about liberty is the ability for people to disagree, and to shout someone into silence for not accepting a sexual behavior as normal is not liberty ... it is tyranny.

That said, could you imagine the outrage if Kellogg's decided to have an "All Godly" cereal with Crosses, descending doves, and Christian fish shapes in the cereal?

The media and Democrats would ridicule and shame them into bankruptcy.