One Day There Will Be A War 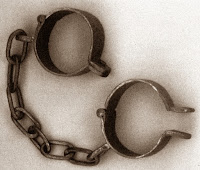 Evil exists.  Enemies are all around us.  The totalitarian consequences of their aims are inevitable.  While the followers of leftism may claim they have the best of intentions, that they want peace and love, and all they really want is for us all to coexist, the reality of what is coming stares us in the face from history.  Collectivism and socialism always leads to coercion and authoritarianism, and ultimately betrayal against those who refuse to follow their sick and twisted path to destruction.

Socialism has been playing behind the scenes in the Democrat Party since the 1880s.  Socialism has infiltrated many of our institutions, and proponents of socialism are purposely driving towards overturning our liberty, and our constitutional republic.

Even more alarming is the fact that the socialists of today's Democrat Party are calling for things that on the surface often seem to be the opposite of what they will ultimately call for once they gain full power.  When they call for no borders, which is also a call for globalism, ultimately, like the Soviets and other communists in our history, they will ultimately put up borders and restrict the movement of those under their ruling iron fist.

The no binary thing being a part of their madness makes sense, though.  The communist goal is full equity, where there are no differences between the workers.  The goal is to strip people of their human characteristics, and their individuality, so that they become nothing more than identical oxen doing an equally mundane task as nothing more than mindless creatures.  The war against God's system of two sexes is definitely pushing us toward the Marxist idea of mindless and genderless equity.

About this time, if a leftist Democrat is reading this, they will likely have been repulsed by my use of the word "communist."  Is that not what the new socialists of the Democrat Party are?  Are they not raging Marxists who support his political system of communism?  Do I not see posters of Karl Marx at their rallies, and other gatherings?

We are being bombarded by shadow politics that projects upon our President what the left is guilty of, while they dismantle our system from within.  They have contempt for the United States Constitution, and they are blending Marxist principles with an agenda appealing to those who inhabit the mainstream left. The problem is, President Trump recognizes what they are up to, and now we are more privy to it, as well.

While weaving their Marxist views with identity politics, which dominates our college campuses, the entertainment industry, the mainstream media, and their political circles, they have been outed by Trump's team, and the conservative movement.  They say they embrace "democratic socialism," but as Ayn Rand explained, there is very little difference between democratic socialism and the communism of the Soviet Union, North Korea, or China.  The difference, as she pointed out, is the same as the difference between murder and suicide.

Their mainstream politicians dance around the meaning of the word “socialist,” and the millennials who claim to believe in socialism for the large part don't understand the true definition.  They do what they can to keep Karl Marx out of the conversation, but as I stated before, President Trump has tweaked them enough that they have been regularly outing who they really are.

In my discussions with these people, what amazes me is that they believe themselves to be “anti-totalitarian” and "anti-violence."  The problem is, violence and authoritarianism is the natural consequence of their ideology.  When they run out of options, violence becomes their only remaining tool, and once they gain control authoritarianism becomes necessary in order to force them to be equal.  We already see it manifesting through political correctness, and the intolerance by the Democrats for conservative principles and positions that oppose theirs on the issues.

They reject and condemn capitalist-oriented societies, yet claim to have no connections to leftist tyrannical ones, but the curtain will be thrown open once they get to the point where violence is their only tool remaining.

Marxism requires the destruction of the church and the abolition of traditional family structures before they can even take over.  It reinforces their equality chant, while eliminating the one group that still stands in their way.  That is the reason behind transgenderism, gender nonconformity, and the championing of homosexuality.  They think to abolish capitalism, eliminating the traditional family is a part of that path.  True reproductive justice seems to be to not reproduce at all, and if one does, to do so in a manner where there is no family, and the village raises the child.

Therefore, pregnancy is seen as a tool of oppression, which then makes abortion a form of liberation.  Child rearing interferes with the female workers place in the workforce.  But what happens when there are no children to replace the workers as they get older?

No problem, they tell me.  The replacements will come from immigration in the form of persons from south of the border, and Muslim immigrants.

Is that not simply killing one's own culture and allowing the invaders at the gates to literally be handed our civilization?

"Yes," a leftist once responded to my observation.  "We are sacrificing ourselves so that the end of the racist white culture may finally happen."

Abolish the family.  Abolish capitalism.  And then, abolish white people.

“It's a modern revolution," I was told.  "It's necessary to bring about economic and social justice.”

Remember when I wrote "sick and twisted" earlier in this article?

Which brings us back to open borders.  From the modern socialist's point of view, open borders are not only good for their socialist agenda, but it is vital to it.

"Labor," said one lefty to me, "must not be contained and restricted. Labor must be able to move freely to other countries so that they all become equal in the distribution of labor."

But, what if workers of certain skills don't want to move to a new location?

"No problem," was the response.  "The government will order them to move if it is best for the global community."

In truth, they really like open borders because it gives them a better chance to overwhelm Americans with additions to the population that hates white people, and will vote Democrat.  America, after all, is the last great obstacle.

The real push of Marxism, however, is primarily being accomplished through the environmental front.  Command and control policies are ready to launch in order to "save the planet."  The New Green Deal is a great example of that.

Socialist Democrat Representative Alexandria Ocasio-Cortez’s chief of staff Saikat Chakrabarti recently said, “The interesting thing about the Green New Deal is it wasn’t originally a climate thing at all.”

“Do you guys think of it as a climate thing?” Chakrabarti asked Sam Ricketts, climate director for Washington Gov. Jay Inslee, who is running for president in the Democratic primary. “Because we really think of it as a how-do-you-change-the-entire-economy thing.”

Economic transformation from capitalism to socialism disguised as environmental concerns.

They all agree that the answer to the climate change problem (a falsified hysteria that is actually a natural phenomenon largely influenced by sun spot activity) is for us to move on from our “capitalistic society” to something “other than capitalism.”

I saw a poll recently that claimed most millennials think socialism is a good idea, but over two-thirds of them could not accurately define what socialism is.  They thought it was simply government help, that it was simply a mechanism of equality, or that we already have socialism because the government already pays for a lot of things.  Most of them did not know that socialism is government ownership and control over the means of production in the economy.  That means an end to private ownership of production.  It means an end to profit, innovation and liberty, as well, because the government will call all of the shots.  Worse of all, it's the end of choice.  Right now, if you don't like a product or a service, if you think the quality was off, or you weren't given exactly what you ordered, you can simply go to the competitor of the product or service you are not happy with and purchase theirs, instead.  Knowing that you have that choice, private business owners become competitive, improving their quality and price to win you back.  But, if we move on to socialism, and you don't like what they are providing, where do you go?  In such a system, there are no alternatives.  There is no choice.  You get what they give you.

While the socialists in the Democrat Party think it is all about social change (economic justice, social justice, environmental justice, etc. etc. etc.), it is actually about destroying the free market system responsible for the explosion of a better world that has emerged over the last two hundred years thanks to the system of liberty provided by the Founding Fathers of the United States of America.  They wish to take away the mechanism that led to the technology they hold dear, and the massive number of inventions that have come primarily out of America (and the other English speaking societies that are based on the liberty of the Mosaic and Saxon influences in their history).  They are committing a culture war against the very system that has given them the freedom to do so.  But, if they destroy it, then what?

In history, the true oppressors came out of ideologies similar to theirs.  In every instance of command and control governmental systems, in every instance of systems where the people decide to chase the false promises of socialism, death has been the result.  Death and bondage.

Granted, the soft socialism in places like Europe has not created complete collapse, yet; but, that is only because the United States has been supporting them with our powerful free market prosperity.  But, once America collapses, then what?  Who will pay for the welfare, and the defense systems against invaders?

The modern socialist says they are willing to go to war to achieve putting the shackles of socialism around their own ankles.  They are willing to fight to put into place a system that wishes to place all of us in bondage.  One day there will be a war, and the socialists believe it will end in utopia, when history tells us that those kinds of revolutions, ones based on no God, no individualism, and a communal sharing of goods and services, always ends in massive death and system-wide bondage.