When Drugs Ruled the World 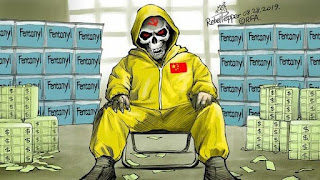 In American History, allegations of the CIA using drug trafficking to help fund some of its operations have emerged often.  One wonders if the Democrats moved the War on Terror from Iraq to Afghanistan to protect their own opium trade.  Donald Trump's border wall would do more than help with curbing the flow of illegal aliens.  It will also reduce the flow of drugs across the border.  One wonders if that could be one of the reasons the Democrats are so against it.

But, what about looking at this thing about drugs on the other hand.  Could drug warfare be something that is being committed against the United States by a foreign power?

The latest drug epidemic in America is the opioid epidemic.  The production and trafficking of fentanyl has been at the forefront of this problem, killing more than 32,000 Americans in 2018, alone.

An interesting note is that China is the largest source of illicit fentanyl in the United States according to a November 2018 report by the U.S.-China Economic and Security Review Commission. The source also notes that since its 2017 report, they have found no “substantive curtailment” of fentanyl flows from China to the United States.

While the U.S. Government has recognized the problem, and has put into place an increase in its crackdown on fentanyl, the reality is that the problem remains and is increasing.  Since the primary source is China, one wonders if the flood of fentanyl into the United States may also accompany a political aim built on a Chinese strategy to undermine and sicken the U.S. population?

For China, it serves as a money-maker, a way to launder money, a way to have something on anybody who helps them (blackmail?), and of course a way to corrupt and even sicken the American public.  It's the perfect chemical warfare.

It also allows the Chinese to influence political operations, encouraging the U.S. Government to pour federal money on the problem while creating an issue that places the political parties at odds with each other.

That all said, China denies that most of the illicit fentanyl entering the United States originates in China.

While fentanyl is nothing new, the recent surge in usage and overdose deaths is.  According to data from the Centers for Disease Control and Prevention (CDC) the number of deaths have increased by the thousands.  Many of the recent cases are linked to “illegally made fentanyl,” the CDC has said.  One thing is for sure, its potency is amazingly high.  Fentanyl is 50 times more potent than heroin and 100 times more potent than morphine.

The Synthetics Trafficking and Overdose Prevention legislation was signed in 2018 by President Trump, and it is designed to curb the flow of opioids sent through the mail while increasing coordination between the USPS and the U.S. Customs and Border Protection (CBP).

In August, the Mexican navy found 52,000 pounds of fentanyl powder in a container from a Danish ship that was coming from Shanghai.

“There is clear evidence that fentanyl or fentanyl precursors, chemicals used to make fentanyl, is coming from China,” Dr. Andrew Kolodny, co-director of Opioid Policy Research at the Heller School for Social Policy and Management, told The Epoch Times.