Why Elizabeth Warren is Calling Bernie Sanders a Sexist 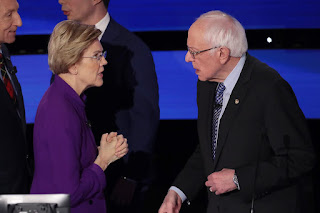 I didn't have to watch the final Democrat Party Debate to determine it was going to be a joke.  As expected, the Democrats, desperate for a champion who can beat Trump, are attacking each other.  At one point, during a sort-of off-mic moment, Elizabeth Warren approached Bernie Sanders and accused him of calling her a liar.

Warren: I think you called me a liar on National TV.

Warren: I think you called me a liar on National TV.

Sanders: You called me a liar, you told me -- Alright, let's not do it now.

Where did that come from?

To fully understand, we have to go back a little bit in time.  Earlier, before the debate, Warren, on CNN said that Bernie told her that he did not believe a woman could win.


Bernie denied the charge, saying, "It is ludicrous to believe that at the same meeting where Elizabeth Warren told me she was going to run for president, I would tell her that a woman couldn't win," Sanders said. "It's sad that, three weeks before the Iowa caucus and a year after that private conversation, staff who weren't in the room are lying about what happened. What I did say that night was that Donald Trump is a sexist, a racist and a liar who would weaponize whatever he could. Do I believe a woman can win in 2020? Of course! After all, Hillary Clinton beat Donald Trump by 3 million votes in 2016."

In 2016, Bernie Sanders was the radical, but because he might pose a danger, the chosen one (Hillary Clinton), and the Democrat Party establishment, used a rigged primary to make sure the self-proclaimed socialist could not beat Hillary Clinton for the nod.  This time, Bernie is surrounded by radicals, and so there is nothing political that can be used to separate him from the rest of the pack.  And, as this election season progresses, Bernie may actually have a shot at securing the nomination.  This concerns the establishment, and his opponents ... chiefly, Elizabeth Warren.  So, the knives are out.

A question regarding the sexism allegation then emerged during the debate:


Abby Phillip: CNN reported yesterday that, and Senator Sanders, uh, Senator Warren confirmed in a statement, that in 2018 you told her that you do not believe that a woman could win the election.  Why did you say that?

Bernie Sanders (Grinning): Well, as a matter of fact, I didn't say it.  Uh, and I don't wanna waste a lot of time on this, because this is what Donald Trump, and maybe some of the media, wants.  Anybody who knows me know that it is incomprehensible that I would think that a woman could not be President of the United States...Hillary Clinton won the popular vote by 3 million votes.  How could anybody in a million years not believe a woman could become President of the United States?

Bernie Sanders: That is correct.

Abby Phillip: Senator Warren?  What did you think when Senator Sanders told you a woman could not win the election?

Elizabeth Warren: I disagreed.  But, this question about whether or not a woman can become President has been raised, and it is time to attack it head on.  Um, and I think the best way to talk about who can win is by looking at peoples' winning record.  So, can a woman beat Donald Trump?  Look at the men on this stage.  Collectively they have lost ten elections.  The only people on this stage who have won every single election that they've been in are the women.

Is this really about if women can win the election, or is it about the fact that Bernie is no longer a stand-out?  The Democrat Party has joined Bernie on the far left socialist fringe, and only Joe Biden remains as a voice of what was once a more moderate mainstream agenda of the Democrat Party (or, at least that's what they wanted you to see, back then).

The Democrat Party now regards Bernie Sanders as a clear and present danger, even though the base of the party has chased him over to the far left fringe.  Like in 2016, the ruling establishment has decided that Bernie must not be the candidate.  Elizabeth Warren agrees, and her campaign is not pulling forward as she'd hoped.  So, to boost her numbers, her knives are out for Bernie, as well.

The base of the Democrat Party wants radical change, so Biden won't do, and Bernie (like Biden) is an old white guy who may have help jump-start the radical direction the Democrat Party is going, but he's a part of the old guard that is seen as being antiquated and not hip enough for the new socialist revolution.

Besides, even if Bernie had said what Warren claims he said, would it have been a sexist statement by a sexist, or was it an honest observation about the reality of the state of elections in America at this point in history?  As Mark Steyn pointed out on Tucker Carlson Tonight, "If I say to some gay guy I don't think Iran's ready to elect a gay president, it doesn't mean I'm homophobic, it's just an assessment of the state of the race, as it were."

So, what, then, is this all really about?  I think it is that the Democrat Party desperately wishes to beat Donald Trump, and they are fast realizing that they may not have that candidate; and if they do, it's not Bernie Sanders.

Following Mark Steyn's comments as a guest on Tucker Carlson's Fox News program, the truth was ferociously illuminated by guest Ian Samuel, a progressive, leftwing, former Supreme Court Clerk who self-proclaims himself as being an American Socialist.


Tucker Carlson: Is this working?  Elizabeth Warren is basically leveling an identity politics attack against her chief rival on the left, Bernie Sanders.  Is it effective?

Ian Samuel: No, it's not.  And, the reason they're doing it is because there's nothing else they can do...This was very predictable.  About a week or two ago you started to see this sort of coordinated release of analysis and articles and things like that saying, 'Hey, has anybody noticed that Bernie Sanders might actually be in an incredible position to win this primary?'  The same sort of pundits on CNN, The New York Times, people like this, who would basically ignore his candidacy for a long time, suddenly realized, 'Wait, this guy's not a joke.  He has the most money.  He's first, or close to first, in all the early States.  He's got real strength in the Super Tuesday States.  Is it possible he might actually win?'  And, there was about a week of that, and they were all feeling like, 'mm-hmm,' now they get it.  Of course the thing that was going to come next was, 'What are we going to do about it?'  And, there's not time to out-organize him, there's not time to out-fundraise him, and there's certainly not time to explain to people why his agenda, which is very popular among voters, is not something to believe in.  So, what do you reach for?  The last refuge of scoundrels.  You lie, and call him a sexist.  And, I have to believe that even the Elizabeth Warren campaign knew that this was going to be tough for people to believe.  Bernie Sanders in 1988, as a surrogate, by the way, for Jesse Jackson, right, in his presidential campaign...said, he thought a woman could be elected President.  It's a tough argument to make.  But, what else are you going to do?"

Tucker Carlson: Well, I don't know.  You could critique his policies, which are radical, and I think deserve a debate.  And, one of the things that enrages me is that the rest of us are bereft to that debate.  We would be enriched by it.  We'd be terrified by it, we might learn something, that's the whole point of this whole stupid process is to inform us, and all we're hearing is sexism, racism.  It's like, childish."

Ian Samuel: Yes, it is, but here's the problem; they tried that.  So, what, err, where did things go wrong for the Elizabeth Warren campaign?  Easy.  They had a good Summer.  Really good Summer.  I was actually a little afraid of they had such a good Summer.  And then, they got into the details of the debate.  Healthcare policy.  Medicare for all.  How are going to pay for it?

Tucker Carlson: She had not thought it through.

Ian Samuel: She had not thought it through.  And, she thought she could sort of pull a trick.  We are going to be able to do this without raising taxes.  We're going to be able to do this in year three.  And, then we'll have a sort of option at the beginning.  And she tried to pull a fast one.  And, they lost that argument, decisively.  So badly that it tanked their campaign, all the way from the heights that I thought they were going to just roll all the way to the nomination, down to where they are, which is third or fourth place, and they started bleeding everything to Pete Buttigieg, of all people.  Talk about getting humiliated.  You're losing to the boy-mayor from South Bend.  So, they tried a policy argument.  The problem is, their arguments were bad.  And, they couldn't win that argument.  And, so, now they're looking around and thinking, 'Well, Hillary Clinton didn't have good policy arguments, either, but, she had this.  Why don't we try that.'  And, it's just not going to work.