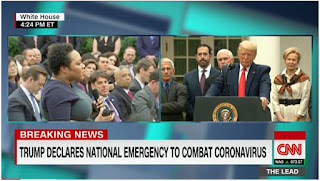 If the other things didn't work, why would they think this would?

The liberal left progressive crazies want the coronavirus to be Trump's Katrina, even if they have to lie about it like they did about Katrina.  Heck, even Bush's Katrina wasn't what they claim.  The delayed federal response with Katrina was not because President Bush refused to send in FEMA and other federal teams, it was because the governor of Louisiana refused to let the federal government move into her State.  Constitutionally, the federal government may not operate inside a State unless they have the permission of the State to do so, and Governor Blanco refused to declare a State of Emergency at the time of Katrina, which basically sent the message that the federal government was not welcome.  Then, when the worst happened, they lied, claimed it was Bush's fault, and the rest is history.

Now they are doing the same with Trump.

During a Press Conference yesterday Reporter Yamiche Alcindor asked President Trump about disbanding the pandemic response team on the National Security Council in light of the coronavirus outbreak in the U.S.  The President was confused.  He had no idea what she was talking about, and said that he had not closed any offices, but perhaps there was something to what she had said, and was willing to look into it.  Except, the thing about Trump closing pandemic response offices is a lie that the dishonest press has fallen for.

In short, they have gotten to the point where they believe their own B.S.

I found the truth at Politifact, a normally left leaning fact-checking website.


Joy Behar, a co-host of ABC’s "The View," accused President Donald Trump of dismantling anti-pandemic programs the Obama administration set up across the globe.
Barack Obama "set up anti-pandemic programs in 47 vulnerable countries as a way to protect against something like the coronavirus, exactly," Behar said during the March 9 episode of the show. "Do you know that Trump closed 37 of them?"

The TV host’s claim is wrong, and it’s not entirely clear how she got her numbers, either.


As the Washington Post noted, there were concerns among global-health leaders that U.S. funding for an initiative known as the Global Health Security Agenda was running out, and that some U.S.-run pandemic-prevention programs would have to be downsized as a result.

But the Trump administration never pulled the plug on those programs, although it did propose smaller budgets. Congress has injected more money into them in recent budget requests.

One day after we reached out to ABC for comment, Behar made a tongue-in-cheek correction on air.

"The other day, I mistakenly said that Trump shut down anti-pandemic programs that Obama had set up in nearly 40 countries," Behar said. "I’m happy to say, he only attempted to cut funding for them, but that did not ultimately go into effect. Isn’t that good?"


It’s not clear why Behar referred to a shutdown of 37 of 47 programs when the 2018 news reports said the CDC was considering scaling back 39 of 49 operations.
It’s possible she pulled from a tweet by Sen. Chris Murphy, D-Conn., whose claim that Trump "shut down 37 of 47 global anti-pandemic programs" was debunked by other fact-checkers. But however you crunch the numbers, it’s hard to get to 47 countries — or 49, for that matter.

Reporter Yamiche Alcindor not falsely accused Trump of closing the offices, but even said people who used to work in one of the offices said it hurt the response to the coronavirus.  If no offices were closed, how could that be?  Is it possible that Alcindor made that completely up?

Congressman Dan Crenshaw has caught Joe Biden making false statements about the Trump's handling of the coronavirus, too.  He's not only been working to expose Biden's own lies, but to also hammer away at democrats with one simple statement.  "Border wall makes sense, now, doesn't it."