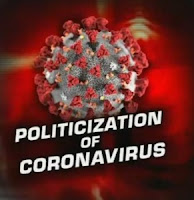 For weeks I have been telling you that the coronavirus is not as dangerous as they've been telling you.  Nearly all of the cases of people contracting the illness results in either them having no symptoms, or have mild symptoms.  Most people have already had the disease, and didn't even know it.  The mortality rate is lower than the seasonal flu, and sheltering in place is actually more dangerous than letting the virus takes its own course.  If we had done nothing except perhaps shelter those at greatest risk (those with low immunity such as the elderly, or those with conditions from other ailments), and let ourselves get infected, the disease would have ran out of new hosts quicker, been gone quicker, plus we would have the antibodies to fight a stronger mutated version if it came back in the future.

For my opinions Political Pistachio has been banned from being posted on Facebook, and half a dozen social media sites have shut me down.  I have been labeled a person spreading fake news, when in reality, I was ahead of the curve.

Now, a new study out of USC confirms much of what I have been saying.

According to the Los Angeles Times, "Hundreds of thousands of Los Angeles County residents may have been infected with the coronavirus by early April, far outpacing the number of officially confirmed cases, according to a report released Monday.  The initial results from the first large-scale study tracking the spread of the coronavirus in the county found that 2.8% to 5.6% of adults have antibodies to the virus in their blood, an indication of past exposure.  That translates to roughly 221,000 to 442,000 adults who have recovered from an infection, according to the researchers conducting the study, even though the county had reported fewer than 8,000 cases at that time." 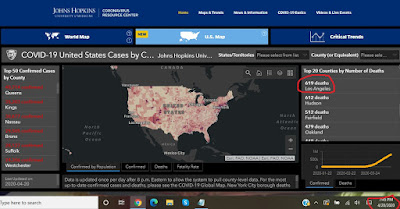 In short, if (let's take a number in the middle) 330,000 adults have already had the infection and survived, and currently 619 people have died in Los Angeles County, that makes the mortality rate .0018%.

I have been saying half a percent, possibly as low as 0.01%.

That means that the virus is spreading widely regardless of the stay at home measures we've been taking, and that the mortality rate is so low, the "shelter-in-place" policies, as well as the social distancing nonsense, has been all for naught.  I have a better chance of being struck by lightning during a storm (.033333%) than dying from COVID-19 if I contract the disease.

“We haven’t known the true extent of COVID-19 infections in our community because we have only tested people with symptoms, and the availability of tests has been limited,” study leader Neeraj Sood, a professor at USC’s Price School for Public Policy, said in a statement. “The estimates also suggest that we might have to recalibrate disease prediction models and rethink public health strategies.”

According to the Los Angeles Times, "The findings suggest the coronavirus is far more widespread than originally known, and that its fatality rate is much lower."

I've been saying the same thing for weeks, and (let me say it once again) I have been banned from posting Political Pistachio links on Facebook, and shut out of other social media sites, as a result of me being ahead of the curve.  When I told you all of this, I was considered a pariah.  L.A. Times does it, and it is ground-breaking news.

Remember, also, there is evidence that the fatality numbers have been padded, so the mortality rate may be even lower than we are coming to discover.

The question now, is, have they known this all along?  And with this evidence, why would governments (more specifically State and local) continue with their draconian, totalitarian policies regarding the coronavirus?

Because it is not about the virus, it is all about getting you used to government control over your lives.  We used to be wolves for liberty.  Now we have become mindless sheep.

Two article links and a graph link for your much needed perusal.