American Sheep and Their Rulers 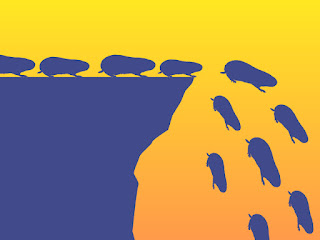 Here in Riverside County, California, while the State leadership is drunk with power, the local sheriff has said he will not enforce the State's totalitarian edicts.  Sheriff Chad Bianco says he has looked at the numbers, and the lockdown orders are not necessary.  Yet, when I go out to go to the store, or any other place of business willing to let people through their front doors, almost everyone are still wearing face masks.  I haven't worn mine in weeks, and the only reason I had it on my face in the first place was because some stores required it, fearful of the big bad authoritarian health department shutting them down.  So, I placed a forerunner of the mark of the beast on my face so that I could buy what I needed, and then tore it off the moment I got out of eye shot of the lackey at the front door.

I have been saying all along that the coronavirus is not what they are telling us, and that frankly I would more likely get struck by lightning than die from this thing.  I am not making light of the fact that for a very small minority of people it is a nasty bug and they have died horribly from it.  There are other diseases that people die horribly from out there, and I haven't stopped my life and hid in the corner from them, so why would I sacrifice my liberty for a minor novel coronavirus that is being overblown as a threat, and being used by the authoritarians to get the ruling power they have always desired?

As I walked through the stores today, I was one of only a small handful refusing to place the governor-ordered armband to my face.  I thought to myself, "What a bunch of lemmings.  These mindless sheep have falling in line quite easily.  They score an A plus in the eyes of the communists, fascists, and authoritarians throwing around these totalitarian orders from government."

Many of these people are probably the same people who were erroneously calling Trump a fascist, at one point.

Now we are in the middle of the month of May.  Many of the GOP majority States have opened up.  There have been no spikes of the disease in those States, the hospitals are not being overrun with sick people, and people are not dying in droves because those States reopened too soon ... as the liberal lefties hysterically warned would happen.  Their economies are beginning to get moving again, and it is obvious that even if COVID-19 was what the crazy people have been saying, the worst has past and has gone along its way.  The States opening sooner, rather than later, are doing the right thing.

Rather than take a lesson from that, however, the rulers who are drunk with power have tightened their grip.  The lockdowns in States run by Democrats who are hungry to be rulers have become stronger, tighter, and in some cases, downright nuts.  According to Tucker Carlson on Fox News, in Illinois, business owners are being threatened with prison time if they try to reopen.  New York City's Mayor DeBlasio is threatening to use force to yank anyone out of the water if they go swimming in the ocean, you know, because the ocean must be teeming with the disease.  Mayor Garcetti in Los Angeles says it's okay to walk on the wet sand, but not the dry.  Of course, there is the obvious question: How do you get to the wet sand if dry sand sits between you and the wet stuff?  New York's Long Island's Nassau County has banned doubles tennis, and if you play singles tennis, there must be empty courts between players.  Oh, and you have to bring your own tennis balls so that you don't touch other people's tennis balls.  When a gym opened up in New Jersey, the police arrived to force everyone to disperse, and the owners received a summons for violating a governor's order.

Violating an order?  It is not law.  Without legislative action it cannot be a law.  And according to the 14th Amendment, States cannot make laws that deprive any citizens of life, liberty or property with due process.  A virus is not due process, and an order is not a law.

This is the result of power landing in the laps of authoritarian Democrats.

And if you think this is bad, imagine what they would be up to if we were disarmed!

It's not about what is best for Americans, it is all about power.  It is about being rulers.  They consider themselves to be a ruling class, and the constitution, liberty, and anyone or anything that stands in their way, from their point of view, is useless, worthless, and must be removed (or jailed).

Our country was founded upon the idea of the people standing up against tyrannical actions by the government.  It is okay to say "no" to the government.  In fact, it is your obligation and duty to say "no" to the government when it is acting in a manner that compromises your liberty.  It is not their responsibility to protect you from your own decisions.  It is my decision, and it should be your decision, to go out and act in a manner that we wish to.  If you don't like it, don't go outside.