We are in a war.  It is both a political war and a spiritual war.  It is a war of ideas, and that means among the battles are those which are waged in the realm of speech.  Tyrants wish you to believe that those who cry out in the name of Liberty, those who fight for freedom and a restoration of the constitutional republic, are terrorists, and that their words are fake news and their words must be stricken from the lexicon.  Only in our modern era has truth become such a revolutionary act.

Ben Shapiro, trying to put forth such a message, retweeted the following on Twitter: 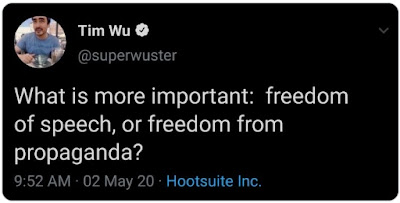 He meant to reveal an example of how horrid the beliefs of leftists truly are.

I am not sure if it was Twitter, or the original Tweeter (Tim Wu) who erased the post (I believe it was the latter) but the fact is, sometimes when tyranny reveals who it really is, often a clean-up crew arrives to try and either make it vanish, or make it look acceptable.  Only the hard left would try to convince you that it is possible to pick up a piece of crap by the clean end.

Nonetheless, the Democrats, and their communist/fascist/progressive/socialist minions wish you to believe that liberty comes with caveats.  Theirs is an acceptable liberty.  Liberty without their guiding hand socially engineering it is simply chaos, and a bigoted hateful way to live.

So, they ask a question they believe to be rhetorical.  "What is more important: freedom of speech, or freedom from propaganda?"

Is the question asking that if someone's words do not tow the line of the hard left, it must be eliminated?  Silenced?  Burned?

And what about the people who utter such things?  Should they be eradicated too?