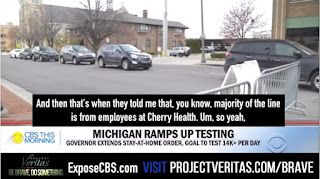 By Douglas V. Gibbs
Author, Speaker, Instructor, Radio Host
James O'Keefe, of Project Veritas, is known for his undercover journalism, and this time he caught a massive fish on his hook.

“You’re telling me—you’re 100% certain, that CBS News, CBS News Corporation national—staged a fake event. They faked the news. They faked the reality, and broadcasted that to all of their audience, last Friday, May 1st on CBS This Morning,” O’Keefe asks? “100%. Absolutely,” his guest responds.

Gayle King hosted the CBS This Morning segment, where the network was trying to make it look like the Trump administration's efforts were falling way short, but that the Governor of Michigan was somehow pulling off the miraculous in the State of Michigan (a State, I must add, that Trump surprisingly won in 2016).

King says in the segment, "Adriana Diaz shows how Michigan is trying to improve a system that has failed some of its people."

Diaz then takes over.  "But the governor [Democrat Governor Gretchen Whitmer] says testing above all else, will help to determine when to fully reopen."

The camera on CBS provided a scene of a long line of cars lined up for testing.  The people in the cars were supposed to be patients waiting to be tested, but in reality, the cars contained medical personnel posing as patients, and only one or two of them were actually patients.

One may argue that CBS News can't be faulted for one bad segment.  Except, this is something they've been up to all along.

To make it look like New York was being overwhelmed, CBS grabbed footage from an Italian hospital.  As they showed the footage, New York’s Democrat Governor Cuomo talked about the dire situation in New York hospitals.

CBS, in both segments, were trying to hammer on the Trump administration, claiming that he's not getting to the hospitals equipment they need to fight the coronavirus, and that he's not making sure testing is happening, but that's okay, because the Democrat governors of some States are picking up where Trump is missing the mark.

Here's the video from their latest Fake News attempt in Michigan: