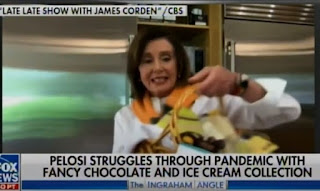 Pelosi, Biden and Ocasio-Cortez were at a dinette somewhere deep within Nancy Pelosi’s vineyard mansion next to the $24,000 freezer for an endorsement shoot. Pelosi was standing while dishing out ice cream when Biden said “where’s the cake and candles?” Pausing in mid scoop, Pelosi said “what?” “it’s not a birthday party without a cake” Joe observed. Ocasio-Cortez said “we’re just having ice cream today.” Pelosi sat down to Biden’s right, AOC was to his left.

Biden looked straight into the camera and said “Corn Pop was a bad dude, he used to sit in my lap and stroke my leg hair. But I combed it out, didn’t want to look ruffled.” AOC and Pelosi looked at each other. Biden added “I’ve got to go to the little boy’s room”, then slid his chair back and walked off camera.

AOC seized the moment to talk all bug eyed about her climate change WWII, about cows farting so it’s a good thing meat processing plants have shut down, the plant workers shouldn’t go back to work when the plants open back up, that elephants are endangered species so they get carbon credits for all the farting they do…

Pelosi broke in with stating the purpose of the get together on camera, that they were going to endorse Biden for President, why not save the speech for another time? AOC explained why not - “Shut up, Nancy”.


AOC hysterically continued on about children drowning in scalding flood water 12 years in the future and evil corporate billionaires cheating hard working bartenders out of tips when Pelosi suddenly turned her head and incredulously exclaimed “Joe! Tell me you’re not peeing in the trashcan!” An exasperated off camera male voice said “Oh, God, he did it again.” AOC whipped her head around to the direction Biden had departed toward, then her jaw dropped in disbelief.

It was uncomfortably quiet for what seemed to be a century or two.

Biden reappeared on scene with a steak knife and an apple. AOC said “Joe, your fly is open.” “It’s Ok, what can’t get up won’t go to the beach on Sunday. You have to wear a hood at the beach” Biden explained, then put the knife and apple down and began massaging AOC’s shoulders. She slapped his hands. Biden said “No malarky, I believe survivors. In my Navy days we’d throw them a rope. You get rope at the hardware store, then buy some beer and go shooting. When I was a game warden and Bambi was a full grown buck he often stayed around me for protection from hunters. Sometimes he stroked my leg hair. Bambi knows I like big bucks.”

Then he turned his attention to Pelosi, walked over behind her and began sniffing her hair. Pelosi got a wide eyed look like she was expecting a Marty Feldman Young Frankenstein gag complete with snarling and barking, then the look changed to one like someone gets when they jump into an ice cold lake after Biden popped open the snaps on her bra. Pelosi’s breasts plummeted below her belly button like a condemned man dropping through the trap door at the gallows, only faster and farther.

In the next scene Pelosi showed off her gourmet ice cream, Biden and AOC were nowhere around, and that’s the only scene that got on TV.

When Pelosi endorsed Biden on camera a few days later, she looked composed, was brief, and neither Biden nor AOC were present either.

In the words of the deceased yet immortal champion BS-er Paul Harvey, “Now you know... the rest of the story.”

-- Political Pistachio Conservative News and Commentary
Posted by Douglas V. Gibbs at 12:05 AM