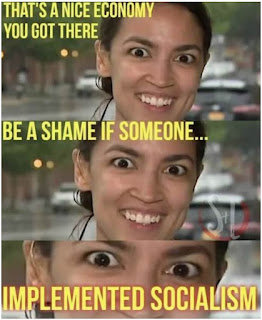 It only took three thousand Bolsheviks to change Russia forever.  When the NAZIs emerged in Germany, they began as only a small party, and was even at one point banned for trying to stage a coup.  They committed mass terror, and worked to turn morality on its head.  The dead were just meaningless numbers.  What truly mattered to the men in charge of bringing about tyranny was the revolution.  Seizure of power in the name of bringing about utopia, and doing so by breaking the backs of a few millionaires.  Broken promises were made, and enemies were created to foment anger and fuel the revolution. “The bourgeois,” Lenin liked to proclaim, “will always be traitors and cowards.”  Vladimir Lenin and Adolf Hitler both convinced their supporters that the old system was against them, so it needed to be destabilized, and eventually dismantled, so that a new system could be considered.  The NAZIs and the communists aimed to "rethink" society, and rebuild it in their own engineered image.  Laws were a bourgeois invention, unsuitable for revolutionaries.

In the United States the revolutionaries have done what they can to destabilize the presidency.  Fake news propaganda, political attacks, and impeachment against President Donald Trump, however, did not yield the opportunity to grab the reins back that the liberal left progressive commie Democrats have desired.  While the Chinese Wuhan COVID-19 novel coronavirus has provided some opportunities for the authoritarian Democrats holding office around the country, it wasn't enough to break the Trump administration.  Then, the Democrats received a gift.  A surprise opportunity that the radicals had been hoping for.  I am guessing they were hoping for a mass shooting to get a countrywide system of rioting in place, but a white police officer's knee on the throat of a black man, resulting in the death of the suspect, was all the opportunity they needed.

Riots exploded in the City of Minneapolis, only to spread across the country like wildfire.  Destruction and death has become commonplace.  Democrat politicians have championed the protesters as they, and their leftist counterparts in the media, ignore the part of the equation that has resulted in death, and further destruction of the American Economy.  That doesn't matter to them.  The dead and the damage the rioting is doing to business owners are meaningless numbers, to the liberal left.  What is important is the revolution.  What is being championed is the revolution, and the potential emergence of utopia.  Who cares if they are breaking the backs of a few millionaires, the economy, and the American System as a whole?

As the rioters work to fundamentally transform America a new mantra has emerged.  The liberal left, claiming that police brutality is out of control in this country, are calling for defunding the police.

Like their historical counterparts, the NAZIs and the Bolsheviks, the old laws are an invention of the old system of power.  American laws, and the law enforcement institutions there to execute those laws, are unsuitable for the revolutionaries.  So, they wish to defund the police.

Defunding the police, however, is a ludicrous idea.  I never thought I would hear such madness in my lifetime.  But, considering what the liberal left has been fomenting all of my life, I should not be surprised.  And, it is easier to understand what they really mean when you think about it.  They really mean more than defunding the police.  They mean to do away with law enforcement as it exists in our current society, which is a path of destruction, a path to the destabilization of our American Society.  It is a coup against our constitutional republic.  In the name of "demanding justice," the radicals are calling for the overthrow of the American System.

They wish to replace the old system with a new "transformative" model of collectivism.  Jeremiah Ellison, Minneapolis City Councilman, and son of Minnesota Attorney General Keith Ellison, who is a meld of radical Islam and radical leftism, tweeted, "And when we're done, we're not simply gonna glue [the department] back together.  We are going to dramatically rethink how we approach public safety and emergency response."

The promise is a well-managed collective community from a localism standpoint, but what will happen is more chaos as the poorest neighborhoods fall into more chaos and more authoritarian control, not just by the politicians, but the race-baiting opportunists and dominant gangs in each of the communities.

Law and order will die.  Roving gangs will simply shoot and kill off any MAGA supporters like it's hunting season.  Then, the businesses will either leave, or fail, as looting becomes the new normal.  The plan will create more no-go zones, as we see in Muslim dominated areas in places like Ilhan Omar's district in Minneapolis, and Dearborn, Michigan.  The concept the liberal left is coming up with is a replica of what they have been up to in Europe, where law and order is breaking down, and Muslim no-go zones number in the hundreds, if not thousands.

Then, American Society would collapse, with violence reaching a crescendo.  And as the chaos heightens, the leftists will propose another plan; except this one will be more than transformative, it would declare the U.S. Constitution "unconstitutional" and send us into the failed utopias Hitler and Lenin tried to create.

Bondage.  Progressive madness that, like Bolshevism during the Russian Revolution, has become a vastly simplified religion masquerading as science and political change.  It's a new twist on an old, and failed ideology that always results in chaos, famine, and the deaths of millions.