Time for Civil Disobedience is Now! 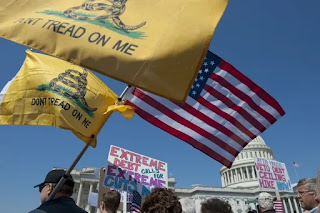 In a 5-4 Decision the United States Supreme Court has determined that California restricting church gatherings is not unconstitutional, and does not violate the "free exercise clause of the First Amendment."  The Ninth Circuit Judges, regarding restrictions against churches regarding the free exercise of their religion, and more specifically, worship services, said, "constitutional standards that would normally govern our review of a Free Exercise claim should not be applied."  The last time I checked, the First Amendment does not say, "Freedom of Religion, unless there's a virus."

The court's decision is unconstitutional.  They are wrong.  Liberty must prevail.  And it is time the American People send that message.

In 1777 a small pox epidemic swept through the fledgling United States, and it occurred while we were fighting for our independence.  The British Troops had stronger immunity to the disease because its presence in Europe had been long standing.  In response to the disease, despite its 10% mortality rate, new United States offered a voluntary vaccine, quarantined the sick (not the healthy), and remained open for business and at war with the Redcoats through the disease's journey along our shores.  While some precautions were taken voluntarily, the decisions were left up to the people, not through government mandate.

A little more than a decade later the Yellow Fever swept through Philadelphia, taking the life of the mayor, Samuel Powel, during the epidemic.  Powel, and his wife Elizabeth, had been given the opportunity by the George Washington family to wait out the disease at their home on Mount Vernon in Virginia in the name of safety, but the Powel couple felt their presence as a firm voice of leadership in Philadelphia was more important.  Some people died, most survived, and liberty was never compromised during the affair.  After the Yellow Fever departed, the immune systems of the Americans grew even stronger, and the country continued on to become the greatest this world has ever seen.

Now, we face a novel coronavirus that, if you honestly look at the numbers, has a survival rate of over 98%.  The death numbers have been padded, and we have been told a massive spike in cases has gripped our country, but interestingly enough the number spiked as testing increased.  In other words, due to testing, we don't have more cases, we simply have more cases we know about as a result of the testing.

This mild virus has, honestly, killed some people, but largely those who have underlying health issues already in place.  But, for the most part, it is nearly harmless, and usually asymptomatic, to anyone under 60, and is a slightly stronger bug for those over 60.  As a result of a minor virus, we have refused to trust our immune systems, gone against science with "run and hide" strategies, we have shut down our economy, and worse, we have allowed the tyrants in political office to run wild with their authoritarianism.

We have complained, we have yelled, and we have taken them to court, and the dictators continue to do the evil things they do without any consequence.

The time for that stops now.

Remember how proud we were of the rise of the Tea Party Movement when President Obama's policies threatened our Liberty?  We rallied, we shouted, and we were rewarded with a caucus in Congress, and with the election of a President named Donald J. Trump who has shown us that he has an incredible ability to stand firm, with a resolve of steel.

Have we learned nothing from him?

Dr. Martin Luther King Jr. did more than complain and form rallies.  He committed civil disobedience to ensure that the Civil Rights Movement moved forward and got national attention.  Should we not be doing the same in the face of this moment in history when tyrants are stomping all over our liberty?

Despite the Supreme Court's ruling, it is time for churches to stand in defiance.  They need to unite, and hundreds of churches around California, and thousands around the country, need to openly hold worship services, regardless of what the ruling elite is mandating.

We also need to hold "face parties," where those of us who refuse to wear masks visit public locations in groups to get our point across.  Target liberal businesses, government facilities, and the lobbies of media outlets freaking out about the Wuhan Chinese COVID 19 virus.  First, one person walks in without a mask.  As the person who thinks they are security for the establishment tells the person they need to have a mask on, another unmasked person needs to walk in.  Then another.  Then another.  Do it until the whole place is full of people not only not wearing masks, but hugging and talking and shaking hands with each other.  Let them arrest the whole group, if that is what is necessary to get media attention, and the attention of the American People.

That's the rub.  You must have the stomach for civil disobedience.  You must be willing to take a risk that may include arrest, or worse.

I will wrap up with this little story to help you understand the perspective we need to be having.

In 2016 I had a Trump/Pence sticker in the window of my car, and a woman said that I was brave, and she would not do the same because she feared someone scratching her paint job on her car by running a key along the side of it if she put a similar bumper sticker on her vehicle.

"Think about what you just said," I responded.  "The Founding Fathers put on the line their lives, their fortunes, and their sacred honor, and you are worried about a paint job."

Liberty deserves better.  It is time for civil disobedience.  It is time for us to risk more than just a paint job on our car.  But, to make it work, WE must organize, and WE must do it.  Otherwise, we cease to be We the People, and we become, "those who once enjoyed liberty, but threw it all away to be in bondage in the name good intentions and a virus."