What replaces Police if they are defunded? 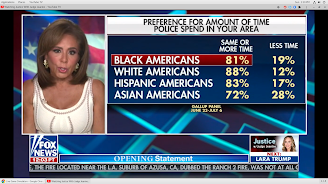 There's an old saying, "Be careful what you wish for." In my conversations with acquaintances who are Democrats, and support the "Defund the Police" mantra, each and every one of them assured me what was meant is not to completely dismantle the police, but to demilitarize them.

From my observations, the crazy people rioting, I mean peacefully protesting, mean what they say.  They want the police defunded, and dismantled.  They, according to people like the Minneapolis City Council, wish to eliminate police and replace it with something a little more in line with what they believe to be "social justice," through a peaceful, non-police-state-looking, "public safety agency."  A plan, by the way, stopped for the time being in Minneapolis by a volunteer commission who said it's too late to put the plan to toss aside the police in the large Minnesota city on the November Ballot.
Despite the fact that, as the graphic above from Fox News reveals, most people are against less police presence in their community, the liberal left has turned the future of police departments into a major election issue.  And, truth be told, the Floyd protests had little to do with the anti-police position being taken.  It's just an excuse.  Historically, eliminating the law enforcement of the old system is what rebellious insurrectionists do.  Out with the old, in with the new.  The communists in the Soviet Union did it.  The NAZIs did it.  Every dictatorial oligarchy in history does it.
Which brings us back to our original question.  If the police are dismantled, what replaces it?  The Minneapolis dream of loving social workers?  A Black Lives Matter militia?
Like with anything, if you eliminate the police, it will create a void, and that void has to be filled with something.  As we learned in places like Iraq and Libya, if you take out the guy you are not fond of but can often work with, the likely replacement will be something worse.
The Democrats have gone too far to turn around, now.  They are married to the police abolition movement, now.  The question is, as a number of cities around the country move to defund their police, we must ask ourselves, what will be the alternative replacement?
The Democrats are not really sure.  They want social workers, counselors, and peaceful people who can talk to the bad guys who, likely because of racist republicans, are only angry at something like white privilege, and are not really bad guys after all.
Or....
Once the feces smacks the rotating blade, they may go the opposite extreme, as is the historical norm.
In history, when promises to soften the brutality of the law enforcement in place becomes the mantra of a group of radicals calling for a regime change, the replacement turns out to be something worse.
Whatever you wish to call it, in the end, the replacement is always a unified national policing system ... something that stands in stark contrast with the idea of localism envisioned by the Founding Fathers.
In short, understand what we are talking about is the elimination of city police departments and county sheriffs, replacing these agencies with federally controlled enforcers who know nothing about the local flavor of your community, nor do they care.  All they know is that they will be in place to be a strict enforcer of the demands of the central government.  No church services?  No assemblies of large groups?  No non-essential travel?  Don't worry, they will enforce it, with brutal force if necessary.
That's what centralized national policing does.
Secret centrally controlled agents are the natural alternative to standard policing.  Well, there is that, or the sweet community of counselors, who, if you've ever been members of a Home Owners Association before as a comparison, are hardly sweet, and unlikely to be fair and reasonable.
"Rules are rules, and you're breaking them."
Ultimately, that becomes mob rule, which creates chaos, which then ushers in the cries for law and order in a disorderly society, which brings us back to the centrally controlled national law enforcers.  In other words, in the face of chaos, it is usually those who created the chaos who promise order, and they deliver it with gestapo sharp pin-point accuracy.
With such systems comes propaganda, secret torture, and re-education mechanisms to fix and problems with non-compliant citizens.  But, don't worry.  As long as you can escape the "racist" label, you should be fine ... that is, unless your neighbors turn you in.
-- Political Pistachio Conservative News and Commentary
Posted by Douglas V. Gibbs at 12:25 AM

History show with no law the nation or country becomes a federal law enforcement with no outside watch committee. If one it can be adjusted as need. They talk about gun control and larger challenges. These would go to zero.The death trenches. Federal or military type law lead to more problems. You talk about racism black lives matters moves control from 1 to another.All lives matter the big boys minding the laws just like the younger. Take the mind to live in peace. Protest with a real truth in mind.