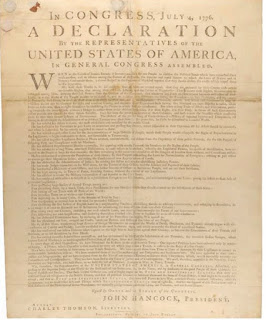 Thomas Jefferson penned the Declaration of Independence as part of a five person committee assigned to the task. In addition to Jefferson, present were Benjamin Franklin, John Adams, Roger Sherman (the only person to sign all four founding documents; Articles of Association, Articles of Confederacy, Declaration of Independence, and the United States Constitution), and Robert Livingston. Interestingly, Livingston never signed the document because he believed the timing of calling for independence was premature. The edits to the document by members of the Declaration committee and the Continental Congress numbered to 86 changes to Jefferson’s original draft, reducing the final length by more than a quarter of the original draft. Jefferson was unhappy about some of the changes, which included removing language condemning the British promotion of the slave trade. While Jefferson himself was a slave owner, he was an ardent abolitionist who called for the abolition of slavery throughout the remaining years of his life. The language condemning slavery in his original draft was not acceptable to the two most southern states of the new country, South Carolina and Georgia, where the slave culture was most deeply embedded. The removal of the anti-slavery language, in the view of the signers, was necessary in order to keep the adoption of the document unanimous among the thirteen original states. Jefferson's objections were heard and considered, but holding together the complete union of states in a unanimous manner was more important to the delegates. Later, in 1787, in the U.S. Constitution, slavery was considered to be a State issue, once again in order to provide a compromise acceptable to the southern-most states of the young union in the hopes the compromise would keep the thirteen original states together, while also hoping that such a compromise would be temporary.  Most of the delegates at the Constitutional Convention believed that slavery would slowly be abolished by each State independently within their lifetimes.  George Mason, one of the framers of the Constitution who had been present during the entire convention, refused to sign the document because it did not abolish slavery, and because it contained no bill of rights, which he believed should be fashioned in a manner that resembled the English Declaration of Rights of 1689. He believed both the abolition of slavery, and a bill of rights, were required components of the American experiment if it was going to succeed, and stand the test of time.