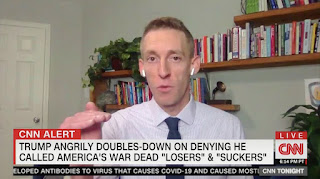 By Douglas V. Gibbs
Author, Speaker, Instructor, Radio Host
The latest attack against President Trump seems more like a cornered bully blindly swinging his arms rather than being anything that may smack of any truth.  The claims are that when President Trump visited the World War I veteran's graves at Arlington's cemetery where many of them are laid to rest, he called those WWI fallen "losers and suckers" while questioning why the U.S. fought with the Allies in that particular war.  The outrageous claim is a repeat of the attack against Trump years ago accusing him of calling McCain a loser because he got captured by the enemy.  The evidence on the McCain claim was questionable, the evidence for this latest claim is non-existent.
Upon hearing the latest mainstream media claim that Trump had disrespected our veterans verbally other journalists immediately called out the smears as provably false.  Not only is there no evidence Trump said the words, the fact is, he wasn't even able to visit the WW1 cemetery due to bad weather.
Of course, none of this is a surprise.  This is the game the liberal left Democrats plays.  They lie, project, and play dirty.  It's the only hope they have left as their base begins leaving the party as a result of its radical leftward lurch, the party's support of draconian coronavirus policies, and their support for the Marxists in the streets who wrongly call themselves Black Lives Matter.  I say "wrongly" because their cause has nothing to do with racism, and everything to do with anti-American Marxism.
-- Political Pistachio Conservative News and Commentary
Posted by Douglas V. Gibbs at 12:32 PM