From Lies to Violent Coup 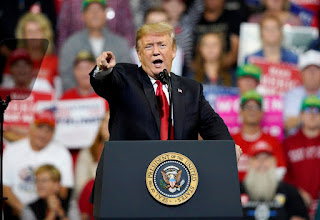 By Douglas V. Gibbs
Author, Speaker, Instructor, Radio Host
President Donald J. Trump frightens the liberal left Democrats, and the establishment's Deep State, because he is not a politician.  He is a businessman outside the system who recognizes who the enemy is, has pointed at them, and said, "I am going to dismantle you."
Panic sunk in quickly, so the lies about Russian Collusion, and so forth, emerged quickly.
Now, Trump's teams are zeroing in on the perpetrators, and the orange jump suit fitting sessions are closer than they ever have been before.  Panic mode has changed to freak-out mode.  And they are willing to hunt their enemy down like the antifa idiot in Portland did with the Patriot Prayer kid, and use violence to unseat the President and forcefully take the White House after they lose, despite all of the fraud, in November.
The reality is that Trump is polling well among blacks and Hispanics, and the election is not only going to be a landslide, it will be a historical blow-out.
I believe the President has mechanisms in place to combat their unlawful craziness.  And, if they try what a lot of folks expect them to, and their embrace of the radicals of the far left Marxist variety continues, we may see the death of the Democrat Party in its present form, and a positively influenced America that will last generations.
-- Political Pistachio Conservative News and Commentary
Posted by Douglas V. Gibbs at 12:44 PM