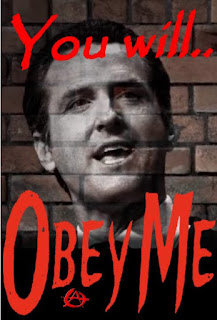 When I picked up my wife tonight from work, she said to me, "Did you hear? Now there is going to be a curfew, and thanks to that curfew, I will lose even more hours at work."

Money is already tight because of the existing COVID-19 protocols regarding a virus that has a 99% survival rate.  But, to the ruling elite Democrats who only want to take advantage of the situation to increase their power and act like tyrants, our well-being or ability to take care of ourselves is not their concern.  In fact, they want to put us into the poor house.  That way, we might be inclined to chase after government programs and an eventual dependency upon those handouts.
California Governor Gavin Newsom has illegally ordered California into a state curfew, without legislative support, and without the authority to do so on his own. The curfew begins Saturday Night, requiring Californians to remain in their homes from 10pm to 5am unless performing essential activities. Most of us are on the freeways going to work before 5am.  The hope is that going to work in the morning, or coming home from work after 10pm (which I often do) is considered essential.

Newsom, who recently broke his own social distancing, indoor gathering, and face mask rules and then lied about the indoor dinner by saying it was outside has decided that even though everything is essentially closed, somehow the virus is more viral after 10pm.  In a statement, he filled us full of his tyrannical excuses claiming the pandemic is spreading faster and it is necessary to become more Hitleric to stop the spread.  “It is crucial that we act to decrease transmission and slow hospitalizations before the death count surges. We’ve done it before and we must do it again.”

The false science regarding the COVID-19 scamdemic is based on the idea that since virus's and bacteria are bad the way to deal with them is to avoid them (or so a school teacher told me recently that is what they are teaching the kids in today's textbooks), rather than use methods like herd immunity which basically places trust in our own immune systems.

The curfew is set up to last until 5am on December 21, more than a full month, and I am going to predict he will cancel Christmas if the alleged rate of infection doesn't decrease.
The California governor claims the curfew is necessary because, according to him, higher spread occurs during late night "social activities and gatherings that have a higher likelihood of leading to reduced inhibition."
California Health and Human Services Secretary Mark Ghaly, another hypocrite who was with Gavin Newsom at the recent dinner outing they got caught at, echoed Newsom's reasoning, telling reporters that Californians engaged in late-night activities risk spreading the virus to people with health risks.

“Many people who may be out and about between 10 and 5 are not the most vulnerable, not the oldest Californians,” Ghaly said, but “we know those who are out, who might be engaged in higher-risk behaviors, that those infections can quickly spread.”

While Governor Newsom expects local authorities to enforce his latest totalitarian move, local law enforcement agencies and sheriffs have vowed to defy it.

Since the typical gathering places are closed thanks to the COVID-19 scamdemic protocols (clubs, bars, etc.) then what the governor is saying is he is targeting residential social gatherings, and late night parties by young people.
In other words, he is telling us what we can or can't do inside our homes, or the homes of our friends or family, and he wants to use the curfew to keep you in your own house rather than letting you go visit other homes for social gatherings.
The order exempts trips to grocery stores, pharmacies and takeout restaurants, as well as workers performing essential functions, which range from health care to public safety.
We still, however, are not allowed to dine indoors at restaurants, we can't go to church, the beaches in certain counties are off-limits (as well as public parks), schools are still not allowed to let students back in, and in some cities people are even being cited for not wearing a face covering in public.  The last time I checked in Costa Mesa the fine was $100.
To the northwest of my location the City of Los Angeles has already put in place its own tyrannical policies that includes a curfew that includes forcing businesses to shut their doors between 10pm and 6am.  There are also plans to renew a strict stay-at-home order in Los Angeles County.
-- Political Pistachio Conservative News and Commentary
Posted by Douglas V. Gibbs at 10:31 PM