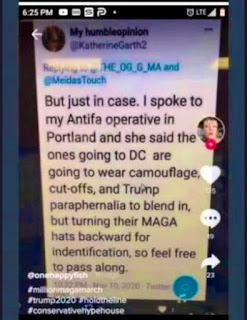 I am a lifelong constitutionalist, conservative, and a proud Reagan-baby (meaning that I voted in my first presidential election for Ronald Reagan, 1984...the year I turned 18).  I have always believed in the cause of liberty, limited-government, and the principles of both the Holy Bible and the U.S. Constitution.  I have been politically active my entire adult life, and much of my life prior to my post-school years, and I consider myself a pretty reasonable person.  I adored Ronald Reagan, tolerated George Herbert Walker Bush even though he was a globalist, complained about the Clintons, thought that Bush Jr. ("Dubya") was okay but preferred him to be the guy in the White House when 9/11 happened as opposed to the Democrat alternative, recognized Barack Obama as the infiltrator and Marxist that he was (and is), and while I was not sure about Mr. Trump when he was a candidate in 2016, I have become a huge supporter of the man as I have watched him battle for America, for liberty, and against an establishment I believe is poised to take down America and turn it into a post-constitutional socialist tyranny.
While I am politically as conservative as can be, however, I don't simply vote for a Republican because they have an "R" after their name, and I try to be as logical as I can be when analyzing the political picture before me.  I am, after all, not a Republican as much as I am a constitutionalist, and a Christian.  Therefore, I vote for candidates who are believers in localism, who are pro-life, and firm supporters of the economic free market (among other things).
On Wednesday, when the rally in Washington D.C. unfolded, and we saw the eventuality of violent confrontations, and a storming of the Capitol that included broken glass, and forceful intrusion into the building as Congress critters fled (some believing that the crowd posed a serious danger against them), I asked myself, "Is this what a Trump-supporters crowd does?"
Trump supporters, at least at the events I've seen and experienced over the last four years, are known to be passionate, and even very noisy, but I have never seen an event of Trump-supporters get unruly or chaotic.  Like the Tea Party groups who got real vocal during the years of the Obama administration, Trump-supporter crowds tend to be massive, peaceful, and leave the location they occupy during their rally cleaner when they leave than it was before they arrived.  And, I am not going to say that that is what happens "most of the time," but rather, "all of the time."
So, how strange was it on Wednesday to see what we saw.  The liberal left is calling it "seditious" and a sign of "insurrection."
Never mind what has been going on in riots across the country by the liberal left over the last four years.
What happened on January 6 in Washington DC was not normal.  It was not the kind of thing that President Trump's supporters do.  Yet, there they were, on camera, wearing pro-Trump stuff, forcing their way past barricades, up the steps of the Capitol, and into federal buildings amidst broken glass and gun shots.
How is it that for four years the supporters of President Trump were always on their best behavior, and then suddenly became violent?  While I understand the passions of people, and I agree that when it comes to what has been going on in politics many folks who agree with me politically are saying things like, "enough's enough," and "we have to be ready to fight," I don't believe that the Trump movement has suddenly become a mob willing to do the things that were done last Wednesday at the Capitol.
What is worse is that the media, who has been trying to convince everyone that the "right-wing" is populated by violent domestic terrorists, has been trying since day one to do what they can to portray Trump's supporters as such.  Knowing that, I have to believe when it comes to my own personal logic that something has to be afoot.  A peaceful movement who has held their passions in check for four years is very unlikely to suddenly become an out of control mob with out of control violent tendencies.
We know for a fact that the left-wing crazies like Antifa and Black Lives Matter, not to mention the political power players of the Democrat Party, lie, cheat, and use deception for just about everything they do.  They are unscrupulous, and are willing to do whatever it takes to achieve their ends.  From their point of view, the ends justify the means.  So, why would it be totally out of the realm of possibilities that rather than the violent behavior of the January 6th rioters being that of Trump-supporters, it was actually the actions of liberal left infiltrators posing as Trump supporters?
Prior to the event communications were intercepted revealing that the liberal left was fully aware of the event, and that they were planning on infiltrating and causing problems.  Of the six people I know personally who were on the ground in Washington D.C. on January 6th, most of them have already told me that busloads of Antifa showed up, dressed in camouflage, and with their "MAGA" hats backward.  In the intercepted communications the same was said.  Infiltrators would be on the ground, but to identify each other they would be the ones in camouflage and backwards hats.  Agitators would be on the ground to cause problems, and that is what they did, and then once they did their thing, the crowd pushed and the spillage was in motion.
The two men who ripped down the first preliminary barrier and rushed officers were leftist agitators, and then as they opened up the way, Trump supporters, not realizing what was going on, peacefully followed their lead.
Someone told me that the Washington Times wrote that they identified two Antifa members having infiltrated the Trump supporters in the Capitol using facial-recognition technology.

Who else was there?  How many of the infiltrators were Antifa, or socialist group members, or BLM sympathizers?

That makes a lot more sense than believing that a bunch of elderly or peaceful Trump supporters, after four years of peaceful protests and rallies, suddenly went rogue and began ripping down barriers, breaking windows, and acting in a manner we normally only see from leftist agitators and community organizers.

Amazingly, the lame-stream media refused to call the violent riots around the country over the summer anything other than peaceful protests, and then when they couldn't escape the violent nature of the riots, called them Trump's fault, but now, suddenly, the protesters are not peaceful and they were quick to point blame regardless of the facts or the history behind the groups.

A logical analysis of January 6th, 2021 proves that the behavior of the groups in question creates a shadow of a doubt that Trump-supporters suddenly went into a violent frenzy.  To believe otherwise is, to be honest, disingenuous.