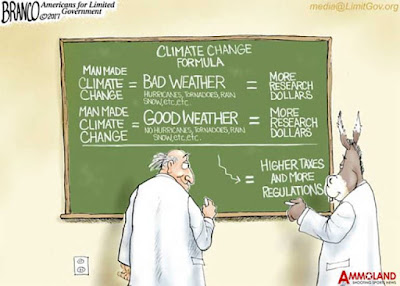 First, let's address the Climate Change silliness through the lens of the U.S. Constitution.  The way the Constitution works as the law of the land is that if the federal government is to have an authority, it must be expressly enumerated in the document, either in the first seven articles, or by amendment.  The authority for the federal government to be involved in any environmental issues, much less Climate Change, does not exist on any of the pages of the document.  That makes any laws regarding Climate Change unconstitutional, as well as agencies like the EPA.

Second, we must view history to gain a firm foundation on where we need to stand on the issue of Climate Change.  For the Democrat Party, the issue of Climate Change is among their top issues, and everything environmental rotates around the belief that the global temperature is being altered by human activity, largely in relation to "fossil fuels."  However, if we look back into history, what we see is a planet that is constantly changing, in terms of global temperature.  Global warming and planet-wide ice ages dot our history as a planet long before the rise of industry, or the use of "fossil fuels" (I place fossil fuels in quotes to emphasize my belief that those energy resources are actually abiotic) - a clue that the rise and fall of global temperatures are a natural phenomenon.  The influence of human activity is very small on the wider picture, and at most negligible in its influence on global temperatures.

Third, while the Democrats call themselves the party of science, it really turns out that they are not.  For example, the Theory of Evolution defies a number of scientific truths, from the concept that like begets like, to the Second Law of Thermodynamics (in its natural state, things naturally move from order to disorder).  Even DNA science has been proving evolution wrong.  Science is based on observable evidence, and mutations that have been observed have shown that only mutations that have no affect on an organism, or reduces an organism, have been observed to exist.  Mutations that improve an organism, somehow adding to the DNA of an organism, has not been observed.  When it comes to biology, the Democrats have also shown there that they are anti-science, and only chase pseudo-science that fits their political agenda.  In biology, the sex of an organism is biological, and does not change if a person decides to dress in different clothes, or take actions to cause their gender to seem to be different on the surface.  In short, if a "transgender" person were to be dug up by scientists a couple hundred years from now, the scientists, using science, would not decide that the lady-boy was a female.  The DNA evidence of the remains would tell the scientists that the cross-dressing, genital-mutilating person was, indeed, still a male.  The same goes for Climate Change.  The Democrats have decided to deny true science so as to chase a political agenda in the hopes of allowing government to dictate regarding any issue they deem is connected to "Climate Change."

While the liberal left will tell you there is a scientific consensus on Climate Change (and consensus is definitely not the way science works), the reality is that there are over 31,000 scientists who say that global warming is a total hoax.

The scientists in question have decided enough is enough, and have united against the political agenda of global warming. The scientific consensus supporting the concept of man-made Climate Change includes over 9,000 scientists (less than a third as many of those who are denying the reality of man-made Climate Change).  The "deniers" have decided the hoax has gone long enough and are now speaking out against the hoax of global warming and how global agreements to limit greenhouse gases are actually destructive to all plant and animal life on the planet.

A petition has been put into play, and includes important peer-reviewed research.  The research is backed by various scientists with a wide spectrum of expertise, and serves as a warning to the United States against signing international treaties that only put a financial burden on the citizens of the country, steal national sovereignty, and restrict its energy production. The global warming alarmism, in other words, is pseudo-warfare designed to take down a country.

The reality is that the concept of man-made Climate Change actually opposes the tree-hugger's desires, because the false science of man-made Climate Change aims to reduce the amount of carbon dioxide in the atmosphere, the very gas plant life requires to survive.  Carbon dioxide is an essential molecule of life, not a dangerous pollutant that needs to be eradicated from the atmosphere.

In short, the Climate Change hoax has nothing to do with saving the planet, and everything to do with the collectivist desire of allowing the global elite leftists to ration energy and redistribute the wealth of more prosperous nations through energy confiscation.

Thankfully, President Trump broke the U.S. free from the Paris Climate Accord.  Unlike the leftist Democrats, Trump understands that removing greenhouse gases such as carbon dioxide would actually hurt the planet, taking away the compound that plants need to thrive.

The above mentioned petition and its accompanying research dispel the myth that projected carbon dioxide levels are going to cause a catastrophic heating of the Earth’s atmosphere and the disruption of climate. The evidence is actually in favor of greenhouse gases, which are beneficial to plant and animal environments on Earth.

Science has shown that the primary cause of warming and cooling at a planetary level is solar activity (sunspots, and the like), not human activity.  As for the "greenhouse gases" in the atmosphere, the oceans and volcanoes have a much larger effect than human activity could ever achieve.

The global Marxist movement is all about taking down the United States, and confiscating U.S. energy output so as to knock us down a few notches.  After all, Marxism is not about lifting those who are behind in order to give them a chance to compete, but about knocking down the prosperous so that everyone can be equally miserable.

-- Political Pistachio Conservative News and Commentary
Posted by Douglas V. Gibbs at 4:44 AM