Ted Nugent: The War Is Coming 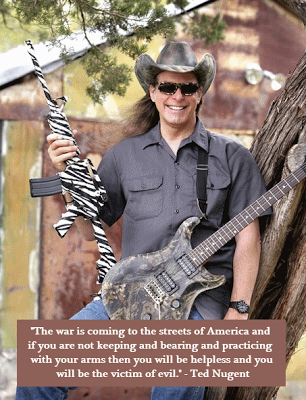 "The war is coming to the streets of America and if you are not keeping and bearing and practicing with your arms then you will be helpless and you will be the victim of evil." - Ted Nugent

Meanwhile, the doctors are being used as federal government snitches. . .

From the Chicago Tribune:

Later that day, Sam told her what the doctors had asked him.
"By the way, Mom," she recalled him saying, "when you were out of the room they asked me if we had any guns in the house."
Guns?
"Yes, it was none of their business," she said. "Where do they get off? I was furious.
"By the way, he answered 'no.' We don't have guns. But that's not the point. The point is that they use bureaucratic leverage to break down our privacy. And the last time I checked, I was an American."
Insley said she wasn't a gun rights crusader hoping to get her name in the paper. She said she was a mom who wanted to make sure other parents know what doctors are asking their children.