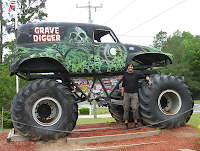 My Grandson, Ezekiel, is five years old and told me how much he loves monster trucks.  I told him if ever the Monster Truck Jam comes to Southern California, I would take him.  It is time for me to pay up on the promise.

After seeing the commercial on TV, Ezekiel told his daddy to call Grandpa, because he wants to go.  We got tickets, and tonight Ezekiel, my son, and I are going to the event.