U.S. Special Forces could soon be using drones the size of bugs that weigh a smidge more than half an ounce.

A Defense One report details the program, which has PD-100 Black Hornet drones flying across the world. They have been in use for about three years by the British and other militaries.

Defense One witnessed the drones, which tip the scales at just eighteen grams, at the National Defense Industrial Association conference.

The drones are launched from a utility belt and transmit video to a screen mounted to the chest of the operator. Data is stored on the utility belt.

The operator controls the drone with a joystick, and there is also an autopilot option.

U.S. Special Operations Command told Defense One it tested some of the drones, and now continues to look at the technology for future use.


Also under development are ultralight, ultrastrong body armor made of vibranium conceptually based on fish scales, and another little gadget the Paulnuts are sure to love, a handheld DNA scanner.

All I can tell you, those who "stand with Rand," is that you'd better start stocking up on flyswatters as fast as you can.

Exit question: What I want to know is, where are the phasers? 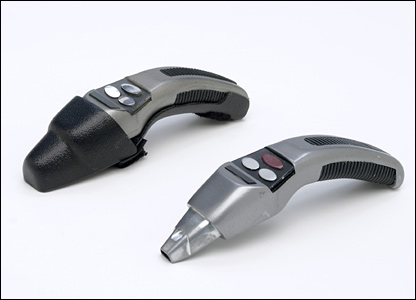