Remember the Charlie Hebdo massacre?  Remember how it raised to the public's collective consciousness the Islamicization of Europe at the particular expense of the Continent's Jewish population?  And remember how Germany has this quaint, dusty old reputation for not being particularly amenable to Hebrew interests?

Bear all that in mind as you watch and listen to German Chancellor Angela Merkel brag that taking in half a million Muslims a year will "change our country":

It’s a truism in 2015 that multicultural Europe has done a dangerously poor job of assimilating its lower-class Muslim population, which means Merkel and the EU would have little choice in the new crisis but to be strict about not admitting giant new populations of destitute Muslim refugees from Middle Eastern countries like Syria and Iraq.

But no, just the opposite. Germany’s waving them through, vowing to accept 800,000 refugees this year alone and 500,000 annually going forward. The other EU countries are expected to absorb their own “fair share,” whatever that may mean. Some of the migrants are being greeted with applause by locals at the train stations in Germany when they arrive, and Merkel herself has noted very casually in her public comments that she fully expects the newcomers will “change our country in coming years.”

What am I missing? Germany’s going to atone for its horrendous persecution and displacement of minorities, particularly Jews, during World War II by welcoming a huge new population from a part of the world known for horrendously persecuting and displacing minorities, particularly Jews? And they’re going to do this over the objections of their European neighbors, who have little right to control new settlements thanks to the EU’s open-borders policy?


Yep.  I'd say that pretty much sums it up.  Or, put another way, Merkel's welcoming of the (for now) passive full-scale Muslim invasion won't so much "change" Germany as change it back.  As in to what it was eighty years ago, if you know what I mean.

To provide some additional perspective, the kind of numbers of Muslims that Merkel is talking about taking in are on a par with our own illegal alien problem in the U.S.  We absorb a million legal immigrants per year on top of the hundreds of thousands of illegals that pour across the border these days at Barack Obama's engraved invitation, a nationally suicidal policy that is inexorably destabilizing our culture and economy because the sheer magnitude of the influx has overwhelmed our ability to assimilate them all, even if the multi-culties weren't pushing all-out for balkanization instead.

However, the U.S. is, in terms of land area, the third largest nation in the world behind Russia and Canada, with 3,806,000 square miles of territory.  Or "elbow room," as the old Schoolhouse Rock jingle used to put it.

Now compare that to Germany: 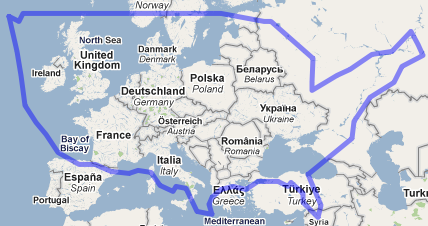 137,903 square miles - or approximately twenty-seven times less "elbow room" for a Muslim migrant influx fifty percent or more the size of the one that is overrunning our own country.

So, yeah, I imagine Angela Merkel's throwing open the gates to the jihadist hordes will "change her country".

And the entire European Union they have to traverse to get there at the same time:

The nations of the old Soviet bloc which are struggling to get their fledgling economies established are being turned into a chaotic corridor for waves of migrants seeking the benevolence of rich, secure countries like Germany and Sweden. As Mr. Orban said: “Nobody wants to stay in Hungary [or] Slovakia, nor Poland, nor Estonia. All want to go to Germany.” And yet his country, and potentially others which have the misfortune to be on the Balkan land route, are being forced to cope with the consequences of this mass movement of peoples. Imagine if you were a poor householder, just managing to keep your financial head above water while you attempted to turn your circumstances around, and a very wealthy neighbour decided to throw open his doors to the needy – and one obvious way that those in need could reach that welcoming haven was by tramping through your house. Might you find yourself inclined to be unhelpful in the hopes of discouraging others from taking the same path?

The real fear of the Hungarians and their fellow Eastern Europeans is that the uncontrolled flow of migrants will force an end to the EU free movement policy which was one of the great attractions of membership for those states. And, of course, they are absolutely right. It is almost inevitable that border controls will be re-established for the duration of the present emergency. Arguably the Schengen principle is one of the causes of this crisis. It is now clearly understood all over the world that all of rich modern Europe will become instantly accessible if you can manage to set foot on any corner of an EU state: so the tiniest Greek island or the southernmost tip of the poorest region of Italy, which have no resources for registering and processing the arrival of huge numbers of people, become the entry points for unrestricted movement. What was intended to be a domestic freedom for Europeans within their own continent has become unbounded territory for the desperate populations of the world. This surely must be the irresistible pitch of the people traffickers.


And let us remember how the Islamic State has telegraphed their intention of invading and conquering "the land of the cross".

Exit spot-on quote from Allahpundit: "Show of hands: Who’s betting on a safe, stable Europe with a secure Jewish diaspora circa, say, 2050, once that Syrian population has grown? What we’re going to get in many of these countries, I think, is a replica of the modern Arab dynamic in which a secular fascist leader grips power tightly with promises to keep the local Islamist radicals in check. You trust that sort of regime, especially one that’s German, to govern responsibly, no?"