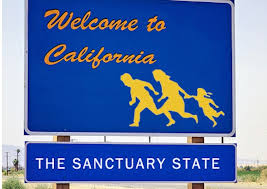 Yesterday, I spent most of the day visiting cities in Orange County regarding their choice (or contemplation of) opting out of California's Sanctuary State law, AB54.  I visited Los Alamitos, Huntington Beach, Newport Beach and Aliso Viejo to discuss an ordinance I have written.  The ordinance was inspired by my discussions with the Banning-Beaumont-Cherry Valley Tea Party, and the hope that the City of Beaumont would lead the charge in telling California that the Sanctuary Status is unconstitutional, and they weren't going to abide by it.

Other cities, and counties, have led the charge, but my involvement continues.  As a matter of fact, now that these cities have declared their defiance against the State of California, my aim is to make sure they survive the aftermath of that decision.  Their ordinances must be ironclad in case it goes to court (and it will).  Whether they use my ordinance, or elements of it, my concern is simply that if these cities continue down the path to opt out of the unconstitutional State law proclaiming California as being a Sanctuary State, that their ordinances contain constitutional language, and case law, supporting their claim.  My interest is that their city is protected, and can successfully navigate the troubled waters that will inevitably follow their decision to opt out of California’s constitutionally invalid Sanctuary State law.

The highlights of my ordinance is as follows:

AN ORDINANCE OPTING-OUT OF
THE REQUIREMENTS OF
CALIFORNIA SANCTUARY STATE LAW, SB 54

WHEREAS, Congress is authorized in Article I, Section 9 of the United States Constitution to use legislation to prohibit the “migration” of persons into the States;

WHEREAS, Congress is authorized in Article I, Section 8 to “establish an uniform rule of Naturalization”;

WHEREAS, U.S. Code › Title 8 › Chapter 12 › Subchapter II › Part IV › § 1227 states that
(in this section I quote United States immigration law regarding who are deportable aliens under federal law)

WHEREAS, California’s Sanctuary State Law, SB 54 is in violation of Manigault v. Springs, 199 U.S. 473, 480 (1905) which indicates that States may take any action (consistent with their own constitutions and laws) unless there exists a prohibition in the United States Constitution or such action has been preempted by federal law. Chemerinsky, Erwin. Constitutional Law: Principles and Policies. Aspen Law & Business (1997, 1st ed.), pp. 166, 282;

WHEREAS, As Justice Kennedy wrote in the 2012 decision in Arizona v. United States:
“The Government of the Unit­ed States has broad, undoubted power over the subject of immi­gration and the status of aliens. … This authority rests, in part, on the National Government’s con­stitutional power to “establish an uniform Rule of Naturalization,” U. S. Const., Art. I, §8, cl. 4, and its inherent power as sovereign to control and conduct relations with foreign nations”
WHEREAS, California’s Sanctuary State Law, SB 54 is invalid because it violates the United States Constitution and federal law;
WHEREAS, California cities, in compliance with constitutional federal law have the obligation to opt-out of California’s unconstitutional and illegal Sanctuary State Law, SB 54.

However, when it comes to immigration, as stated above in the language of my ordinance, immigration, as Justice Kennedy put it, is an "undoubted power" of the federal government, and the Supremacy Clause in Article VI. of the U.S. Constitution applies.

In my visits with officials from the cities I have talked to, and what I have gathered from the information they provided me, the cities are attempting to address specific parts of the Sanctuary State law, naming those parts separately, and addressing each of them individually.  That is not necessary.  The entire law is invalid.

Also, I have noticed that while the City Attorneys acknowledge the 2012 Arizona v. United States case as precedent showing that immigration is a federal authority (it's kind of funny that Obama's demand that Arizona comply with his unwillingness to execute immigration law can now be used against California), they were unaware of Manigault v. Springs, 199 U.S. 473, 480 (1905) as a legal protection when it comes to the concept of federal supremacy.

Other city council members of other cities have also had the chance to take a look at my ordinance, as well, including San Jacinto and Murrieta.  I am also trying to get Hemet, Temecula, and Banning to consider adopting it, as well.  Yesterday evening, I spoke to an official from Escondido and will be emailing them this morning.

The reality is, like gun control, immigration is a topic the Democrats always lose on, and even in California their hardcore stance on these issues are backfiring on them.  In fact, it's gotten to the point that the Democrats are beginning to fear that the potential of an electoral disaster for them may be in the works in 2018, especially in California where the primary is based on a Top Two voter receivers formula, regardless of party.

The Democrat Party's continuing push for gun control and giving support to illegal aliens over citizens is exploding in their faces.  Not only have the cities listed above considered (or are in the process of) opting out of the Sanctuary State law, so has Orange County (with other counties also considering following suit).  In the case of Orange County, the radicals in Sacramento are so angry at Orange County for daring to defy them that the State of California is threatening to arrest the Sheriff of Orange County for taking a stance to uphold federal immigration law by cooperating with ICE officials.

As President Trump has stated, this is about more than whether or not families who really want to be here for a better life should be able to ignore federal law by crossing the U.S. border illegally.  Mixed into those crowds of people entering the country are criminals, child molesters, rapists, gang members, drug cartel affiliates and Muslim terrorists.  In short, our immigration problem is also a National Security issue.  What that means is that these cities who are standing up against the treasonous Sanctuary State Law of California are not only following federal law, and abiding by the U.S. Constitution, but they are participating in protecting our country from enemies who wish to enter our country to cause harm to our people, and our system.  The Democrats of California, for the purpose of gaining more voters and increasing their political power, are placing the well-being of Californians, and Americans, at risk by adhering to our enemies, and giving them aid and comfort.

The stark truth is that they are not humanitarians.  The Democrat politicians in California are criminals who should be arrested and prosecuted not only for breaking federal law, but for treason against the United States of America.

-- Political Pistachio Conservative News and Commentary
Posted by Douglas V. Gibbs at 10:11 AM

Thank you for bringing this up. There were about 10 of us U.S. Citizens who stood up at the Beaumont City Council meeting this past Tuesday to tell the city counsel that they swore an oath to uphold the constitution of the United States, not the State of California. I don't know what their decision will be and I don't know how to find out.