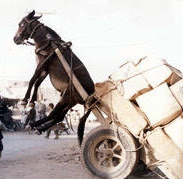 The race of the donkeys ends in 2008, and the jackasses are already out of the gate. The donkey with the most energetic burst of speed is Barack Obama, but the jackass in the lead is Hillary Clinton. Her massive teeth and leftwing kick may hold off Obama for a while, but the race may come down to the wire. Perhaps.

Both continue to attack Bush's policies in Iraq, but are slowly realizing that their ultra-liberal stances are actually pushing voters away from them. With the recent election for Congress where a number of Democrats leaning more to the center won their races, it is clear that though their propaganda to make people believe that all things conservative are evil, Pelosi at the helm in the House have reminded people that all things liberal are not what folks desire as well.

The dark horses (or should I say dark asses) are John Edwards and Al Gore. Edwards seems to be leading the opposition to the war, his surge energized by Bush's Iraq troop increase. Fact is, as evil as Hillary and Obama are, they have voiced that they wouldn't vote for a funding cutoff, now that the troops are in harm's way (and Hillary claims that is the whole reason Bush pushed for the increase in troop numbers, and is stepping up deployment). Edwards is not a Senator, and doesn't have to vote, so he does not feel obliged to make the same statement, and having the strongest anti-war position of the group, he'll probably even proclaim Obama and Hillary weak for "not standing up to the evil Bush."

Al Gore has created his own niche among the environmentalists with his movie about global warming, but I think that most people are beginning to take his movie about as seriously as Jimmy Carter's book, which makes Gore look stupid, if you ask me.

Hillary Clinton will probably win the race because of the army of single women that will flock to the booths just so they can make sure a woman takes office in the White House. And why not her? She made history by winning a United States Senate seat as first lady.

And Hillary is in to win.

And she may win, because the Republicans are fast losing the trust of conservatives. Reaganite Republicans recognize that George W. Bush is a neo-con, and disagree with a number of his issues. Despite the disagreements, he has been voted in for two terms because his liberal counterparts are too frighteningly stupid, and would love to see the United States of America driven into the ground by socialist ideals.

Reagan was the great communicator. He pushed policies that were rooted in firm ideas that seethed with common sense, and he pulled it off with a Democrat-controlled Congress. They passed because they were grounded in truth, and were proven to work. He stood nose to nose with the Soviet Union until it collapsed, and he cut taxes so that the American economy could soar.

Now, Republicans have forgotten that if given the chance, the human spirit will rise to the occasion when not shackled by the oppression of socialistic ideas, or taxation that has overstepped its limits. Republicans have squandered the legacy bequeathed to them. They have failed to follow what Reagan taught. As a result, the Democrats won the elections last November.

Conservatives need to take back the Republican Party by supporting Social Security reform that returns the system to what it was originally intended to be, shrink the size and scope of the welfare system, make some concerted effort to stop abortion, limit federally funded stem cell research, and halt federal expansionism.

Even their attitude needs to be adjusted. When Foley's Folly exposed the man's inappropriate pursuit of Capitol Hill pages, the Republican Party acted as if it was a public relations problem. They fought to protect the image of the Party. It was a morality problem that should have been approached as such. They did not recognize it as a problem of immorality, and failed to take punitive actions against Mr. Foley. The GOP has forgotten Reagan's words. They fail to remember that those in the government are beholden to the people. They are supposed to be honorable public servants.

Republicanism has been hijacked by liberal Republicans, and the solid conservatives are crouching in the corner.

Meanwhile, the Republicans have expanded the federal government, and the lesson don't seem to be clear to them. Bush's Administration must do what it can to return the party to conservative ideas, or a candidate that stands for conservatism must rise from the ashes, otherwise, the donkey race will provide the next President of the United States in 2008, and I don't think this nation can withstand another four years of a Clinton at the helm.

The GOP is choking big time. I agree they have a great chance of allowing the her highness hillary into office, they can't find that tricky triangualtion spot again. Unitl they can make the center comfortable and the far Right complacent, say it with me, President Rodham

Dems love the power and She'll do anything to get elected.

I see MK is still with ya. What's up MK. No website yet?

great post!..08 is looming and truth be told not looking too optimistic as of now..sigh..:(

We need to draft Fred Thompson!!!

Interesting analysis, just one thing this chick will NOT vote for Hilary just because she has breasts and a vagina or does she!? So why don't we have Condi and Rudy Guiliani against Hilary and Obama in the ring, tag team!?

The Republican Party today is promoting policy all too similar to the Democratic Party. Why is that? IMO, garnering votes.

Ronald Reagan was a statesmen. Too many Republicans today are politicians. Politicians are not servants; they are greedy and power hungry.

I agree with your analysis as to how the GOP handled the Foley scandal. Big mistake on the part of the Party.

Tisha, why would anyone in they're right mind expect your or anyone to vote for someone because of their genitalia? Where the heck did that come from? The rightwing?

Love the image. These next two years should be a gold mine for pundits and bloggers. It's too bad Kerry dropped out (not). He's so easy to make fun of. All he has to do is open his mouth.

As for Hillary, today she committed to going after Osama (bin Laden, not Barak, but maybe him too). Too bad her husband wasn't so inclined.

If I was a 7 month preggy socialist ready to abort my fetus wanting higher taxes and to legally marry the woman I'm in love with after I divorce my husband and then go for a sex change because of my indentity crises then hang out at gay bars discussing the up and coming anti-war event @ D.C. while complaing about the lack of universal health care because treating my HIV Aids is getting to darn expensive; and before going home and seeing the 10 commandments in front of a court house and deciding that I'd take that issue to court in the morning after contacting the ACLU about it; I think I'd vote for any number of those as long as they promised to take away all the guns that anyone owns in this country. Yep they'd have my vote for sure bro...

Douglas- you nailed it when you said Dems moving to center are becoming more successful.

We are seeing the same thing here in the UK where Labour are more conservative than the Conservatives on the War etc.

Look for James Webb to outflank dems and republicans.

On the other hand, look for Chuck Hagel to outflank repubs.

It's going to be a topsy turvy campaign!

I knew a woman, who had to have an abortion at seven and a half months for health reasons. She had cancer and had to undergo radiation. It's nothing to joke or be sarcastic about.

Kris, you're copping my lines. I already brought up the Hagel meme. DG, Dave & Jenn all laughed...yeah.

As for Webb, he already outflanked the Bushies, and he out-ranks them too.

Yeah...topsy turvey, and it's going to be sweet - not to mention it will be good for this country in every way.

Rub some dirt on it Mud-Slide...