The Whole Point of the War in Iraq 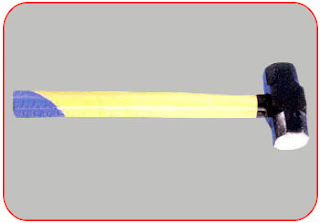 An Iraqi went to the bank to cash a check for his salary from a French Company. The Saudi bank teller asked him to endorse it on the back of the check.

“That’s humiliating,” shouted the Iraqi, “Why should the French be able to sign on the front and I must sign on the back? I want my money NOW!”

The Saudi refused to pay him, and the Iraqi kept shouting in the bank until the bank manager, who happened to be an American, walked into the lobby carrying a five pound sledge hammer. The American walked up to the screaming Iraqi and knocked him on the head with the hammer.

The Iraqi dropped to the deck out cold. After five minutes passed the Iraqi woke up, signed the back of the check without a complaint, and received his money. The Saudi clerk, amazed at the Iraqi's sudden change of attitude, asked the Iraqi, “Tell me why did you not sign the check on the back the first time, but signed it now?”

The Iraqi said, “You missed the point. You only told it to me, but the American explained it.”
Posted by Douglas V. Gibbs at 5:56 AM

Sums it up, I was telling my students this week how everyone needs a good jack-in-he-jaw now and again. Or as Hank Jr. put it, "an attitude adjustment."

Say Obob, I just like good ole Hank Williams Jr. so much he is my all time favorite Country Music artist.
My all time favorite song of his is "Family Tradition".
Yes I agree every now and then the good ole Attitude Adjustment is necessary. What ever happened to the olden times when a father used to not spare the Rod sorta speak, now we got this stuff about oh we must not punish the kids because that could effect their ego. Geez

You have a great sense of humor, I love it. "The Iraqi said, “You missed the point. You only told it to me, but the American explained it. LOL

Speaking of Saudis...if this isn't a rightwing urban myth, then how interesting is this? Saudi Arabia has now banned the letter "X." Why? Because it's too much like the Christian cross.

This from our so-called allies, not to mention the Bush's personal business associates, and family friends. This from our "allies" a State where you can be executed for carrying a bible. This from the people both Bushes have been photograhed kissing and holding hands with. Yes, this.

This is not what our founding fathers had in mind.

Saudi is our allies out of necessity. If we refused to go into agreement with any nation that did anything that we deemed as wrong, we would have no allies. MK, Saudi's are still Muslims, they still hate Christians and Israel, and no amount of American influence will probably ever change that, and I don't really care if they hate us, as long as they aren't assisting the terrorists in flying planes into our buildings or anything.

15 out of the 19 9/11 highjackers were Saudis, educated in Saudi funded Madrasas. News Alert! The Saudis have already flown planes into our buildings...namely the World Trade Center Twin Towers on September 11, 2001. What you say you don't want to happen, DG, already has happened.

(May I reccomend a book you can get at the library - it's called "The History of Oil."

And now the Saudi's are threatening to get involved with Iraq, in order to protect the Sunnis from the inevitable Shia takeover. Why do you think Cheney was summoned to meet with the King a few weeks ago? The Saudi's sent him back with a stern warning.

Great. Good work Bush and Co.! Thanks for all the years of peace and prosperity.

mudkitty is unable to comprehend that there are some bad muslims in lots of those countries Saudi Arabia and Iran and more, those Evil Crazy Muslims are all over the place and mudkitty can't see that.

mudkitty looks at it like we used to fight a whole country like what we used to do, but terrorism isn't simply one State/Country or another.

And my WHOLE POINT is that terrorists come in all stripes and flavors and exist all over the world, so to place so much energy in Iraq is to distract from the War On Terror! (copywrite pending) which is dangerous to our National Security (copywrite pending.)

So you can forget your flypaper theory's and your roach motel/we're fighting them over there so we don't have to fight them over here nonsense. What you Bushies have done is take a baseball bat to a hornet's nest, thus spreading the danger far and wide.

Anonymous said...
This comment has been removed by a blog administrator.
8:14 AM