Be Dubious of Any Deal with Dictators 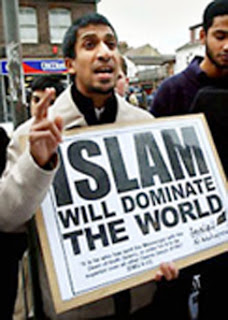 North Korea is just another nation in a long line of countries that has broken the majority of the treaties they have ever signed.

Sure, it's a relief that an agreement regarding North Korea's nuclear program has materialized from the most recent round of six-party talks, and the agreement is certainly better than a military confrontation (I can hear the left now getting all excited, proclaiming that negotiations work just dandy). However, when taking into account North Korea's track record, I think we need to hold our applause for a while.

In keeping with the new agreement, North Korea has agreed to shut down the Yongbyon reactor within 60 days in exchange for 50,000 tons of fuel oil. Also, North Korea is required to readmit the international inspectors it expelled in 2002. Talks are expected to make an attempt at normalization in regards to diplomatic relations between North Korea and the United States.

Wait, don't cheer just yet. Remember 1994? That was the year of a provision that closely resembled this one, and it included promises of such talks as well, and none of it ever led to meaningful negotiations. Simply put, North Korea never fully complied to that agreement, and the agreement finally broke down altogether in late 2002.

Now for the holes in the agreement. North Korea is obligated to account for the plutonium extracted from the Yongbyon reactor since 2002, but is not required to specify the details regarding any nuclear weapons that they may have already built. Imagine that. They would be receiving a $400 million aid package to close their reactor, which is a handsome reward, while already having a credible arsenal. Also, in regards to North Korea's uranium enrichment program, which is different from their plutonium program at Yongbyon, North Korea has never acknowledged that a uranium enrichment program even exists, so uranium enrichment is not addressed in the agreement - meaning they can continue such a program, and remain squarely within the perameters of the agreement.

And don't forget, North Korea's history is proof positive that they cannot be trusted. The nation has broken every agreement it has ever signed on the nuclear issue. Even though North Korea joined the Nuclear Non-proliferation Treaty, they violated that agreement on two occasions (in 1993 and again at the beginning of this current crisis in 2002) before they completely withdrew from the treaty. The violations were both about illegally blocking inspectors in both of those years.

Okay, I admit IF North Korea was to abide by this most recent agreement, it would be an encouraging first step, but remember who this is we are dealing with. They can't be trusted, and we would be extremely naive to assume that the North Korean nuclear crisis has been resolved.

And as this is going on, the left is also screaming for the United States to make nice with Iran.

Like North Korea, Iran cannot be trusted, and has a track record to support that belief. And on top of that, Iranian President Mahmoud Ahmadinejad has pubicly stated that he, and the entire nation of Iran (and the Muslim World for that matter) seeks the eradication of Israel.

Iran, like North Korea, also seeks nuclear weapons to destroy its enemies, and Israel, the United States, and any other free nation of the world, is in their crosshairs.

So, is there anything to discuss with Iran? Perhaps we can talk them down to smaller dirty bombs so that they can only annihilate a few thousand of us at a time. Or maybe, if we're lucky, the untrustworthy Iranians will promise not to use any of their weapons.

Observing the mullahs since the late 1970's, and watching Ahmadinejad, has convinced me that like Kim of North Korea, Chavez of Venezuela, Castro of Cuba, any leader in China, and any other leader in the Islamic World, Iran cannot be trusted, and Ahmadinejad is not capable of being rational.

Making deals with dictators may seem encouraging, but remember, Chamberlain made an agreement with Hitler before World War II, and we know how that one ended up.
Posted by Douglas V. Gibbs at 11:53 AM

Making deals with dictators may seem encouraging, but remember, Chamberlain made an agreement with Hitler before World War II, and we know how that one ended up.

That is a very valid and well-thought out point. But I'm not so sure America should, twice in one decade, launch a preventative strike on a Muslim nation. Although the arguments for launching are quite good.

Hopefully you are wrong and Iran can be talked down.

By the grace of God.

Personally as someone that tries to follow or understand prophecy as it pertains to the last days it looks like all the scumbags are in power that would or could make it happen.

It can go slower or faster depending on the BS politics involved.

I don't think any of them plan on being anything to the United States except royal pain in the a**es. Anything they'd say is lies. Always has been and always will be. We can't trust them...

We're going to keep playing nice political correctness games until one of them has the urge to see how pretty a mushroom cloud looks in one of our back yards.

hi there..I couldnt agree with u more..Trust is a joke to these despots..they know only power, greed and hatred..sigh..great post!

The majority of dictators only respect one thing - whether or not we can kick their butt.

Our congress and the left leaning individuals in this country have sent them a clear signal, that we are more interested in appeasement than kicking butt. Oh, and Anna Nichole. Nothing more important than that.

Good point on the pact Chamberlain made. Being the crux of your arguement here.
How agreements and deals can be so easily broken.
Nope I don't trust any of them.

Thanks for the fly-by Gibbs.

Anyway.. we made tons of deals with the Soviets.. They were a dictatorship, no? Well, hard core communism isn't quite akin to a dictatorship, but they still had an unelected "leader" that called all the shots. In fact, the Soviets came the closest to actually nuking us, so I think the analogy is valid.

Consider the Cuban missle crises. My guess is ya'll would have been advocating, very loudly, a pre-emptive nuke strike on Moscow. Yes?

Did we "appease" the Soviets? If so, blame that one on Reagan.

appease the soviets? No, Reagan appealed to their greedy nature and had an arms race with them, knowing it would eventually break them. No communists are good, but when they have intercontinental missiles pointed at you, military maneuvers are not necessarily the best option. The Islamic enemy is very different from the Soviets. They are driven by a radical religious ideology and are willing to kill themselves to get to you.

North Korea is a little more delicate. I don't believe military action is in our best interest at this juncture, but sitting back and watching them feast their eyes on Japan is not a good idea either.

So the issue that has always confused me is how you have a war on an ideology? How do you seperate the "radical" muslims from the others?

Is the "war on terror" a zero sum game? In other words, if you kill one radical, there is one less, and if you kill enough there will be no radicals? I'm sure you're aware that that that scenario is not realistic and that the process of the "war" itself creates new radicals.

We've seen what the war(s) has become. Bin Laden is still large and in charge. The Taliban is still lurking and consolodating control. Iraq is a bloody mess. Is this progress on the "war on terror"?

So you proclaim defeat? I don't believe it is a zero sum game, just as I disagree that it is about going around killing radicals until there are none. Tom, that's surprises me, because that is such a simplistic way to look as such a complex situation. Offensive war, in this case, is a defensive measure. Take the war to them, keep them off our soil, and enable the moderates that have been unwilling to speak out against the radicals to do so. But, Tom, let's say you're right, and we are fighting an enemy that cannot be won because, as you said, the war is creating more radicals. So then the answer is to wait at home patiently until they come to us? Have you ever played chess? Defensive posturing in that game may lengthen the game, but will ultimately end in your defeat. At least when you take the offensive, you have a fighting chance.

You're not keeping them on Iraqi soil. That's just crazy. It's also taking for granted the idea you think they are stupid, which is dangerous.

Terrorists, of all stripes, can attack anywhere, at a time of their own choosing. Iraq/Messoptamia has always been the crossroad of the middle east. To focus our troops in Iraq, thinking that the enemy is stupid enough to buy into the roach motel fantasy is dangerous because instead of protecting our homeland, we're occupying theirs, in the name of protecting it. Leaving our flanks exposed, and our military stretched thin. I think it's suicidally insane with all due respect.

And on top of that, I think our presence there inflames the region.

Oh that's precious.. I ask you what to do if there is no military solution, and you ask me if we should just leave in "defeat"? Did I read that correctly?

So, your answer is indefinate war. Your answer is to occupy a Muslim nation indefinately and keep killing and getting killed.. until.. what? How long? 100 years?

I'll ask you again.. what do we do if there is no military solution in the "War on Terror"? I just want to verify your answer is to "keep trying".

I don't want to put words in your mouth, but that's what I took away from your response.

And Mudkitty is quite correct in pointing out the absurdity of the "fight them there so we don't have to fight them here" slogan. It's as if there is some magic spell on the "terrorists" that compels them to stay in Iraq as long as our military is there. It's as if it's impossible for them to find their way here. I seem to recall the 9/11 hijackers bought plane tickets, so it doesn't seem that hard.

Why not bring the troops home, give them a rest.. institute national service (akin to what Israel does), re-equip and re-ready them.. and use them in a national defense and disaster response. And please.. fund the DoD and VA properly..

Quite simply, the terrorists are no more or less likely to attack the US regardless where our military is deployed. Isn't that common sense?

Great post, well explained, it's in and you're linked, thanks! NK's Dear Leader is a snake and cannot be trusted for anything but to continue to kill and starve his own people.

always threaten the world
get them to send you money
.