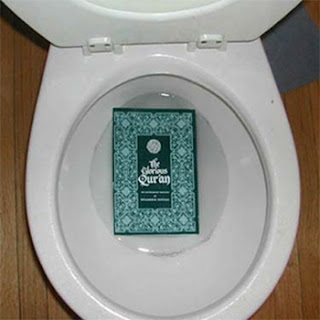 In America if Christ is dipped into a jar of piss, or the Virgin Mary is covered with Elephant dung it is considered art.

However, if a young college student of Pace University from Brooklyn drops the Koran in the toilet he is arrested for committing a hate crime, and could face jail-time.

And according to Little Green Footballs, The Council on American Islamic Relations is so ecstatic to see shari'a being enforced by US police that they've put up two articles about it:
CAIR: Hate-Crime Arrest in NY Quran Desecrations. NY: Student Nabbed in Koran Dunk.

Now, I don't know what the liberal stance is on this, but apparently the libs have a lot of misguided ideas on who the enemy is.

On another Blog an anti-Christian Lefty decided to tear into the writer with his position on Christianity, using arguments that are not only wrong, but common. I've heard them all, being a Christian Conservative.

Here's a quick rundown of his rant.

okay listen here you hypocritically (hmmm, and people criticize me for my rare misspellings) pieces of trash, you guys (I assume Christians) really piss me off, you bash on gays (wrong, I hate nobody, but based on my faith feel that homosexuality is an immoral choice of lifestyle) and yet your leaders rape boys (I am not Catholic, so my leaders are not doing such, but even so, it is horrible it happens, but the choice of those men is their independent decision and not biblical and a whole faith cannot be judged upon the poor choices of a few men), you try to get into state to force us non believers to believe (no, Christianity is preached so that you may know, but the choice is yours), I'll (I corrected this one, the misspelling was just too atrocious) tell you why you believe god (notice it is lower case) exists, because you Christians cant comprehend death (I comprehend death, and rejoice knowing that my life here is but a short moment in a much longer existence), when you die there is no pearly gates (the Pearly Gates are not Biblical, and are nothing more than part of a story for children), just black (if that's the case, then we are both in the same boat, but if that's not the case, you are the one in big trouble), nothing more, nothing less. i believe jessus was a good teacher, but a lier (Jesus was a good teacher because He's God in the flesh, and not capable of lying). he had good ideas but you had to build a belief structure around it (the belief structure is based upon His teachings and the letters of the early church primarily written by Paul). im not saying your guys are bad, or good (afraid of offending?) its just that i hate you recruiters (there are no recruiters. Christians have been tasked with spreading the good news. It is up to the listeners whether to believe or not believe - free will), let me believe what i believe (you are entitled, God Bless)

Cute. Well, his accusations are wrong and should be more pointed toward the Islamists that wish to convert you to Islam, or behead you.

Whatever happened to liberals proclaiming "I am willing to shout from the highest mountain to defend your right to believe what you believe and practice your faith?"