During a Time Where Everyone Seems to be Offended

When a Muslim recently called me a pig because of my 9/11 Memorial hat and pro-American shirt, I was offended. Was what he said to me a hate crime? Of course not. However, for my own safety against the Political Correctness of society, I kept my own mouth shut. Had I have called him a pig back, I would have probably been in for some serious legal problems.

However, everyone else, these days is also offended, but when that happens, it's a big deal. You know, Muslims, Atheists, members of non-caucasian races, gays, and so forth.

If I say anything against the gay population it is considered to be "gay-bashing."

If I say anything deemed inappropriate about the Muslims, I must have Islamophobia.

How about whistling a Christmas tune near a Jew, Atheist, or Muslim? Offensive!

A Muslim woman sued Orange County in California over the right to wear a head scarf. A college student of Pace University was arrested for dropping the Koran in the toilet (which was tasteless, but not a hate crime). A student was disciplined for using the term "that's so gay" (after being asked if as a Mormon she has 10 moms) because it was considered to be an anti-homosexual putdown, and after it went to court, she lost! A four year old kid was accused of improperly touching a teacher. To try to not be offensive in textbooks "Newspeak" has been ripped right out of George Orwell's novel 1984 and applied to university handbooks, using non-sexist language. The emphasis in our universities has shifted from free debate to the compulsory adoption of a dogma called multiculturalism, which includes non-sexist speech and behavior, along with a whole slew of other politically correct beliefs, which uses intimidation to enforce, and will undoubtedly continue to lead our academic system to a certain failure.

And last Christmas a group of carolers were asked to stop singing a Christmas Carol in Riverside, California because it would offend the Jewish skater, Sasha Cohen. Sasha, by the way, not only didn't mind, but stated later she welcomed the Christmas Carols.

However, if an icon of Christ is dipped into a jar of urine, according to our current society, that is nothing less than art. 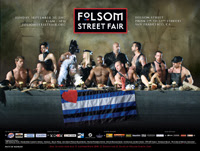 And more recently, if homosexuals mock the "Last Supper" with Sex-Toys, that is not only acceptable, but it is considered to be a courageous ad.

Liberal Readers, is that funny to you?

It's not to me. In fact, it's downright offensive. Where's the ACLU when the offense is against Christianity?
Posted by Douglas V. Gibbs at 8:27 AM