What Secular Humanism/Liberalism/Socialism has Wrought 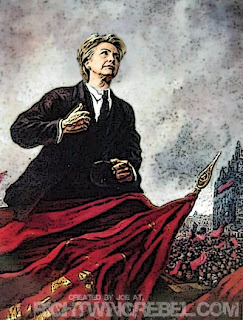 Liberalism is socialism is communism. This is a popular belief among the inhabitants of the right side of the political spectrum. Those that reside on the left side of the political spectrum immediately argue that calling liberalism a form of socialism is arrogant of the right, and an irresponsible tactic. From a hair-splitting perspective, of course liberalism is not socialism, and socialism is not communism. There are a few differences. But, as a general overview, each of these political philosophies share a great number of similarities, and each of these political ideas require that the subject (oops, I mean citizen) place government at the top of their list of importance (hence, the need to eliminate any vestige of God, because an all-powerful body of government must be like a god to the people, and will not tolerate any allegiance to any other god).

The theory behind socialism is simple. Socialism is a system of collective ownership by all the people of the factories, mills, mines, railroads, land and all other instruments of production. Socialism means production to satisfy minimum human needs as opposed to "for sale and profit" like under the system of capitalism. Socialism places direct control and management of the industries and social services with the workers through a democratic process based on their nationwide economic organization. Under a socialistic ideal all authority originates from the workers, integrally united in Socialist Industrial Unions. In each work environment the labor elects whatever committees or representatives are needed to facilitate production. Within each smaller unit, be it a shop or office division of a plant, the people who perform the labor participate directly in formulating and implementing all plans necessary for efficient operations.

Sounds great, doesn't it? Everyone works together in harmony to ensure the products are produced in the most efficient manner possible, placing those that know the most, and can lead the best, into positions of power (oops, I mean supervision).

After all, if looked at on the surface, socialism is truly a democratic way of running things. The workers elect their shop officers, elect representatives to a local and national council of their industry or service and to a central congress representing all the industries and services, and the all-industrial congress plans and coordinates production in all areas of the economy. All persons elected to any post in the socialist government, from the lowest to the highest level, will be directly accountable to the rank and file. They will be subject to removal at any time that a majority of those who elected them decide it is necessary.

Those that support such a system, and teach such a wonderful utopia in our American Universities, state that "Such a system would make possible the fullest democracy and freedom. It would be a society based on the most primary freedom: economic freedom."

For some individuals, on paper, socialism seems like it would mean an end to economic insecurity and exploitation. Laborers would cease to be commodities bought and sold on the labor market. It would mean a chance to develop all individual capacities and potentials within a free community of free individuals.

Such a wonderful dream. Sounds like the perfect system. Now, all you have to do to implement such a system is make everyone work together in harmony, make people give up the dream of becoming wealthy, make people be willing to be controlled by a centralized democratic government, make people accept that if they don't get elected to a supervisory position they will never have the opportunity to rise up unless a supervisor either dies or is unseated (and since people tend to form alliances of power in such a system, being voted out seems unlikely), and make people place the importance of such a system above all other things including their desire to improve themselves, above any desire to become more successful (often characterized by wealth and possessions), and above their faith in anything other than the system )such as an all-powerful God). Wow, that's an aweful lot of things that they have to make people do.

Liberalism is a political philosophy that advocates greater public support, and greater regulation over the private sector. Liberals would like to enable a centralized democratic government to manage everything so that the average citizen can worry about their labor as a worker rather than petty little things like healthcare, housing, etc. In a liberal society as envisioned by the current leaders of the Democratic Party, people have evolved to the point that they understand that the wealthy must be taxed heavily so that those monies can be redistributed to the poor, hopefully eventually eliminating the classes, eventually allowing the "village" to work as a whole, and enabling the community to provide for its citizens everything they need be it housing (like government housing paid for by taxation), health care (government paid health care taken from taxation), food (like food stamps paid for by taxation), and eventually it would mean an end to economic insecurity and exploitation. Laborers would cease to be commodities bought and sold on the labor market. It would mean a chance to develop all individual capacities and potentials within a free community of free individuals. Hmmm, for some reason those last parts sound familiar.

Marxism is the philosophies and teachings of 19th century economist Karl Marx. Marx is credited with the idea of socialism and communism, and the vast majority of his writings were critiques of capitalism. However, he viewed the struggle of workers as a continuation of historical forces that would one day lead to communism. He believed that this "evolution" of humanity would occur in three stages. The first stage was capitalism, in which the workers are exploited by business owners (those capitalist pigs!). The second stage would be socialism, or a "dictatorship of the proletariat (workers)." Power to the people! Marx believed that the second stage would be brief. The third and final stage, communism, would produce a society that would become so classless and collectivist that the formal state would wither away, and society could spontaneously operate as a collective whole without government. A social and economic system would result in where all (or nearly all) property would be public, not private. That is, resources are shared by everyone. In the Marxist ideology, a true utopia would be achieved in the third and final stage of the worker's struggles. Such a Utopian society would mean an end to economic insecurity and exploitation. Laborers would cease to be commodities bought and sold on the labor market. It would mean a chance to develop all individual capacities and potentials within a free community of free individuals.

Conservatism is in stark contrast to those three philosophies that, though not exactly the same, have many similarities, and the same goal in the end. Conservatism is much simpler. Conservatives desire to preserve the tradition of liberty and freedom that has worked so well thus far (we did not become the greatest nation on earth on accident), resist the change to a centralized system that masquerades as freedom for the workers and will end in bondage for all that are not a part of the elite in government, and Conservatism is a political philosophy that calls for reduced government and greater individual freedom in the private sector.

Obama and Clinton are both advancing economic ideas that are essentially Marxist in their nature. They both have proposed radical new levels of taxation for Americans whom they believe possess "too much" wealth, and unprecedented new levels of governmental intervention and regulation with American enterprise so as to "fix" our nation’s problems with healthcare, energy, and the environment.

It is human nature to desire success, wealth and power. A system envisioned by the "progressives" of the liberal Democratic Party in which the classes are eliminated, and wealth is re-distributed, makes about as much sense as my daughter giving up her A's in school so that her points may be re-distributed to the kids getting F's. This does not place them all on the same playing field again. It penalizes success, and rewards failure. But the liberal left is so busy reaching for a utopia that cannot be reached, and feeling apologetic to those that have not reached prosperity, that they are willing to mandate Marxism in America.
Posted by Douglas V. Gibbs at 8:42 AM