Tea Parties Not About Republicans and Democrats

Nationwide Tax Day Tea Parties The Start of a Movement 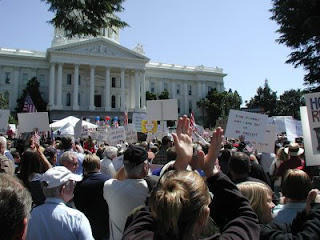 Last February Rick Santelli of CNBC called for a Chicago Tea Party as a means of a revolt against the Obama Administration's mortgage bailout plan, and unsavory economic plans. Since then, the Democrats have spent us into oblivion, inserted government control over private industries, and has overstepped its Constitutional limitations in numerous ways.

In 1773, angry over unfair taxation, colonists known as the Sons of Liberty, dumped over 90,000 pounds of tea from the cargo holds of three English ships as a symbolic act of protest we now know as The Boston Tea Party. That tea party was a grass roots beginning of a resistance against England that ultimately led to the founding of this nation.

With annual deficit projections in the trillions of dollars under the "share the wealth" watch of the Obama Administration, again Americans are feeling unfairly taken advantage of, and feel the need to remind the government that they are our servants, and we do not approve of their unreasonable power-grab.

What many thought would be tens of thousands of individuals across the nation in over 600 cities to make up various tea parties turned out today to be easily over a hundred thousand people. And the rallies had nothing to do with political parties. These gatherings were all about stopping the intrusion of the federal government into people's lives. The federal government has overstepped its Constitutional bounds, and the people are fed up.

The resistance to government today was something I was hoping to participate in, but do to circumstances that held me over into the evening, I was unable to attend any of them. But as I drove through Chino, California I saw the remnants and lingering evidence of the day's activities. Street corners were crowded with people flying American flags and holding high "No Big Government" signs. Once I was on the freeway people were gathered on the overpasses waving to the motorists, waving American flags, and holding their signs up high.

Mainstream Media could no longer ignore the elephant in the room, but didn't know how to cover the events because they don't understand the reason for the events. They think that it is just a bunch of fringe Republicans complaining about taxes. In the case of CNN, a reporter began to berate a tea party participant as he tried to explain the connection of the tea parties to liberty, and Abraham Lincoln.

The Left keeps referring to the organizers as right-wing extremists. As one Associated Press article put it, the tea parties were "Whipped up by conservative commentators and bloggers." This is a grass roots effort. Friends of mine who attended tea parties told me that Obama voters disappointed in what they have seen from him were there, libertarians were there, people who are not normally involved much in politics were there. This is a grass roots effort that had no organizers, and word of mouth (partially accomplished through conservative commentators and bloggers) enabled them to come into being. Each tea party was as individually different as the people involved. What they all had in common, however, is the desire for the federal government to cease its extravagant spending, to stop the taxes that are on the rise, and to halt the growth of the federal government that is becoming dangerously socialistic in its expansion.

Of course, during the "Hate Bush" rallies of the past cars were overturned and fires were started, and the press exalted the protesters as brave and patriotic. When women dressed in pink disrupted governmental functions, or protested military recruiter stations, they were hailed as courageous. These grass roots efforts today are being hailed as fringe and extremist. They are being criticized for daring to question Obama's policies while for eight years the Left did nothing but spew hate and lies about the Bush Administration's handling of the war on terror.

Don't get me wrong, I am not totally defending Dubya. After all, he never saw a spending bill he didn't like, as well. But with all of the complaining by the Left during those years about Bush's horrible spending habits, how come suddenly spending our children and grandchildren into slavery is acceptable?

And with all of this spending, while Obama claims out of the other side of his mouth that he's cutting everyone's taxes except the most richest individuals, how is he going to pay for all this? The taxes by the rich is not enough for his monstrosity of a budget. Taxes are already increasing on goods. Eventually, all of us will be hit with higher taxes, except the half of the country who doesn't pay taxes because they are dependent on the government, and living off of the hard earned cash the government took away from you.

So what does Obama think about all this commotion around the country in the form of tea parties? Is he concerned? Is he going to try to be in tune with the folks that are angry about his policies?

Obama doesn't even care enough to be informed about these events. According to ABC, Obama's people have been quoted to say that the president is unaware of the tea parties.

That's not the only thing he is unaware of (or should I say ignorant of).

I can only hope that these tea parties are the start of a movement - a movement for We The People to stop the unconstitutional expansion of the federal government.