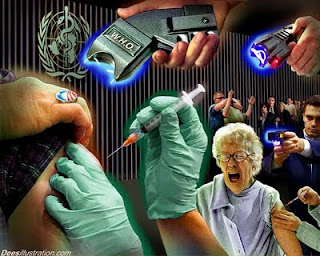 The elitists of the leftist global order would like to take your kids from you. They plan to take advantage of mass quarantines and mass vaccinations to do this, if we let them. H1N1 is the global emergency they've been waiting for, a catastrophe engineered over generations, carefully prepared by powerful and influential globalists to take the next step in controlling the population.

Are we getting ready to be forced to face mandatory Government Orders to get vaccinated with the H1N1 Vaccine? Are we on the verge of total Government Control over our lives while they claim it is simply to keep us safe from the rising epidemic? Could the government use quarantine to take control of political dissidents?

The big government elite recently discussed how to carry out mass vaccinations, mass quarantines, and mass power of the government over the people in an International Swine Flu Conference that ended only four days ago!

Did you hear anything about this conference in the news? Did television news magazines discuss it? Have any of the newspapers reported on it?

Just like the secrets behind the vaccinations, the hidden agenda behind the Codex Alimentarius Commission, and the global aspirations of the global leftist elite, the mass media has no intention of allowing the truth to leak out.

The CDC and the government leftist elitists have been warning of worldwide outbreaks of some kind of disease for years. They have been working on the next pandemic that will "decimate humanity." They desire an outbreak that will make the 1918 Spanish Flu look small.

They hoped the Avian Flu was that outbreak.

Reminding you of Aldous Huxley's "Brave New World" yet?

Now, H1N1 (Swine Flu) has become the leftist's promised vehicle towards controlling the worldwide populace. According to the World Health Organization, and the Centers for Disease Control, the H1N1 Swine Flu is a global pandemic that that has killed 700 people worldwide.

How is that a pandemic? The regular flu in America kills 35,000 annually. The Spanish Flu in 1918 killed 50 million. So the question arises, is the Swine Flu an out of control pandemic, or do they just hope it will become one?

The Spanish Flu killed more than did the Black Plague, and it turned out to be the result of our government secretly experimenting on our own American troops. The disease originated at a military base in central Kansas (Fort Riley). A soldier came down with a fever that infected 100 others before the day had the opportunity to end.

Even then, the attempt by man to play God in an attempt to achieve control over the populace was alive and well.

Ever since that moment there have been stories after stories of vaccines triggering diseases that have become detrimental to our society. For example, reports surfaced that the HIV/AIDS disease activated through the smallpox vaccine. Many proclaimed it to be a deliberate act that is a part of the depopulation agenda.

The Swine Flu Vaccine that will be injected into your arm in October (so they say, and if you allow it) has been linked to a brain disorder. In Germany the vaccine has been linked to cancer. And this is the material they want to inject into the bodies of everyone worldwide in a massive global vaccination being demanded by the World Health Organization. The vaccine was allegedly magically conjured up in a matter of months by Baxter Pharmaceuticals. The truth is, Baxter applied for the swine flu vaccination patents in 2008, long before any breakouts were even confirmed.

Statistics link autism and other diseases to vaccines, as well. These government-proclaimed and corporate attempts to protect us from disease have become more about the all mighty dollar, and control of the population, than about protecting the populace. With the attention the H1N1 vaccine is getting, the feeling I am quickly realizing is that it is going to be mandatory. Should I refuse to be vaccinated, what will be my penalty? Will I receive treatment from the government similar to that a criminal would receive? Would I be hunted down, treated, and quarantined?

In 1976 a similar scene of the government sanctioning our local schools to mass vaccinate our children took place. It was in response to a similar flu scare, and in the end more people died from the vaccine than from the actual flu virus.

More evidence that the flu epidemic is either engineered, or being created through hype in the hopes one will surface, surfaces when you realize that the CDC and FEMA have purchased hundreds of thousands of plastic coffins. Why would the government purchase so many coffins? Could it be that the government has been planning on this coming epidemic of global proportions for a long time, just waiting for the right outbreak to appear? Or is the outbreak coming due to careful planning? Going back to my mention of a depopulation agenda, could it be that they would like to purge society of its extra population, and allow the government to create a police state in the guise of protecting us from the panic over the flu? Internationalists are using the state of fear to create an environment that will ultimately give them the ability to take control of the entire worldwide population.

This clears up a lot of data we've been seeing regarding the creation of internment camps, and the National Guard's recent push for hiring "Internment Specialists." H.R. 645 calls for six internment camps to be built on the property of U.S. military installations. The Pentagon has made a request for 400,000 troops to be deployed to American soil.

Could it be for quarantine? Are they expecting H1N1 riots? Are they expecting those crazy rightwingers on their watch list to react to their sudden seizure of power? Will these troops and internment camps be used to hold members of the populace that refuse the vaccination, and ultimately to house political dissidents?

Civic unrest over the panic of a pandemic is what they desire, even if they have to create such a scenario through the media and well placed lies, in turn inducing hysteria and panic. It creates the perfect storm for martial law. It allows the government the perfect opportunity to take control of the populace, under the guise of protecting the people from themselves, and a rampant flu. And in the process, the opportunity to round up those deemed to be a threat by the Homeland Security Report (you know, those rightwing extremists) will be easily taken advantage of.

Individuals have become the enemies of the state. The threat of a flu killing millions is now on the minds of the populace constantly. The message is being perpetuated by the biased lap-dog media, and is being accepted by the global population blindly. The result will be the excuse to create a police state orchestrated by the government, and ultimately, by worldwide organizations like The United Nations, or an organization poised to replace the U.N. with greater powers, and wider controls and authority.

The United Nations, or the UN's replacement on the horizon, armed with the support of the Obama Administration, and the rest of the big government leftist bureaucrats, will then have us right where they want us.

As terrorists attack population centers, violence again erupts in Iraq and various other places around the Middle East, as violent crime rates escalate, as leftist elitists position themselves for control of the populace, and the hysteria of Climate Change has everyone afraid that the sky is falling, and as the worldwide leaders create the illusion that out of control disease plagues the world, the populace will cry out for "Peace and Security." And the government will provide that peace and security. All you have to do is trade in your liberty.

The frightening scenario presented here, however, is not a forgone conclusion. Individuals standing up for liberty, and combatting the rise of big government, can stop this.

Swine flu vaccine to be given to entire population - Telegraph U.K.

Refusing vaccination labels you a “criminal”, so says WHO - The United American Freedom Foundation

Half a Million Plastic Coffins? - Disinformation.com

The Pentagon Wants Authority to Post Almost 400,000 Military Personnel in U.S. - The Progressive