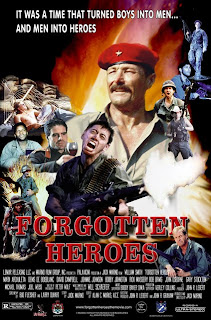 Forgotten Heroes Synopsis: In Vietnam a group of Marines accept a mission to enter into neighboring Cambodia to pick up a defecting Russian General. Once across the border, a Russian officer not willing to let the general go so easily complicates the rescue when he pursues the group with Soviet Commando troops, and gives the Marines a little more trouble than they bargained for.


After a barrage of Hollywood films that have portrayed the American Soldier in a negative light, Jack Marino decided it was time to make a film that reveals the true nature of the military. The troops in Vietnam consisted of fathers, brothers, husbands, and sons. Each one of them were brothers in arms in that foreign land, with all of the same real emotions that one would expect them to have.

Jack Marino's theatrical thank you to our forgotten heroes begins with a meeting near the Vietnam Memorial in Washington DC. The pair of old friends reminisce, and send us back to a time when war in Vietnam was still a reality.

The discussion between the two veterans leads to the memory of a mission into Cambodia. A firefight erupts and it turns out to be an entanglement with Russian troops that are not even supposed to be there. As the firefight comes to its conclusion, two American Marines hiding nearby observe a Russian general, played by veteran actor William Smith. Later, the intel comes back on the general, and it turns out he wants to defect, and it is up to a team of United States Marines to bring him in. . . from Cambodia.

As the film works its way through the base camp in Vietnam, into the dark, moist jungles, and across the border into Cambodia, the realism of the scenery reaches out an pulls you into the action. The characters are rich with unique flavor, and the action rivals any of the war scenes Hollywood has to offer.

Forgotten Heroes also offers a quaint addition for those of you who have been fans of Hollywood films for generations, because the film carries a feel consistent with the war movies of the 1970s, as well it should.

Jack Marino has crafted a Vietnam movie that patriots have been waiting to see for a long time. The characters are real Americans in a situation that insists they be the best they have to offer. Forgotten Heroes is the perfect gift for veterans, and an appropriate way to say, "Thank you," and "Welcome Home."

-- Political Pistachio Conservative News and Commentary
Posted by Douglas V. Gibbs at 11:15 AM