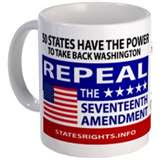 A number of Tea Party Candidates, and some Republican Candidates that are not necessarily "Tea Party" affiliated, have expressed that they would be in favor of repealing the 17th Amendment. The 17th Amendment was ratified April 8, 1913, and changed the election of U.S. Senators from being appointed by the State legislatures to being directly elected by The People. Opponents of the suggestion that the 17th Amendment ought to be repealed, a group that is primarily populated by Democrats, call such a political position a strategy of extremists who would like to "repeal the 20th Century".

The idea of repealing the 17th Amendment is not new. In 2004 Conservative Democrat Zell Miller (the last of the dying breed of non-hard-left-radical Democrats) introduced legislation to repeal the amendment. Also in 2004, during his campaign against state Senator Barack Obama for the U.S. Senate, Alan Keyes stated that repealing the 17th Amendment was a critical issue. In 2006 Utah Republican Senator Howard Stephenson proposed a "soft repeal," which would have given the state legislators the task of selecting the Senate candidates.

Proposing the repeal of the 17th Amendment has been a difficult road to hoe, it turns out, because the power structure in Washington is always quick to demonize such a suggestion as being extreme, dangerous, and an attempt to take the vote away from the people. However, these are no ordinary times, and this election coming up is no ordinary election. They fight it because repealing the 17th Amendment would take some power away from Washington.

The Founding Fathers understood that too much power concentrated at any one source is a dangerous thing. This is why there is a separation of powers in our system of government. The separation of powers, however, even extends to voting powers - or at least it did at one time.

Too much power in the hands of a single group is a dangerous thing. . . including the people. Therefore, the Founding Fathers set up our government to have three voices. The House of Representatives was the voice of the people, having the members voted in directly by a vote of the people. The U.S. Senate was the voice of the States, having the members appointed by the State Legislatures. The President, or executive branch, was the primary emanation of the Federal Government, but the electors for president were also appointed by the State Legislatures. Of course the people were not completely out of the mix on the Senate and Presidency, for the members of those State Legislatures were voted into office by a direct vote by the people. This set-up gave all three parts of the government the opportunity to approve proposed bills.

One of the reasons out of many for this kind of system was because the Founding Fathers believed that deceptive political movements that desire more power to be given to the federal government are capable of fooling the people, and if the people voted for the members of both houses of Congress, and for the electors for President (and especially if the Presidential vote was determined by a popular vote), a tyrannical political system could fool the people, and gain control of all three of those parts of government, which would then also work to change the Judicial Branch, and manipulate society through judicial activism by a branch of government whose sole purpose was supposed to be to only apply the law (regardless of what their opinion was of that law) to the cases it ruled on. Remember, it is the Senate that holds the hearings for the nominees for new Supreme Court Justices. The 17th Amendment has even changed the workings of that process.

The 17th Amendment took away the State's voice, changing the face of our governmental system, and removing the State's ability to constrain a fooled populace, a potentially tyrannical Federal Government, and a court system dominated by judges determined to legislate from the bench in an attempt to subvert the Constitution, and alter society toward the will of a federal government that is not interested in the will of the people, or the voice of the states.

Though repealing the 17th Amendment would not reap immediate results, eventually the effects would begin marching our system of government away from the democracy the leftists are trying to make it, and back to a Republic that folks on the Right know it is supposed to be.

Repealing the 17th Amendment is not an immediate cure-all, but it would be a step in the right direction. Removing the concept of judicial review, implied law and implied powers, and opening up the opportunities for States to nullify unconstitutional law enacted by the Federal Government must also follow. All of these things, and more, are important factors in returning our country to its Constitutional origins. This is why we must remain vigilant, persistent, and consistent.

Taking our country back will be a tough road to hoe, but one of the key parts of getting things turned around would be repealing the 17th Amendment. So kudos to those candidates brave enough to stand up and voice their support for repealing the 17th Amendment. It reveals that not all of the candidates out there are establishment politicians who believe they are somehow above everyone else, looking down their noses at the voters, and at The States.

Federal tyranny is on the run. November is a key part of the process of ending the liberal idiocy that is currently in control of the government in this nation, and ensuring that we return to the type of system of governance prescribed by the U.S. Constitution. . . a limited government that functions within the limitations of the authorities granted to it by the U.S. Constitution.

Thanks for this clear overview of 17th Amendment. This should be printed and handed out.
Americanvoter