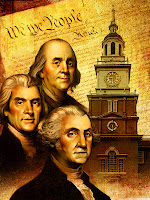 Expressed powers include the power to tax, maintain a military, coin money, establish post roads and post offices, and to establish uniform rules of naturalization.

Those that do not agree with the strict constructionist view of the U.S. Constitution will argue that there are more powers granted to Congress that you can find within the body of the Constitution and its amendments. These are implied powers, which means that there are powers beyond those enumerated that are given to Congress so that they can write laws to make sure what needs to happen happens. In other words, those that believe in the existence of implied powers argue that such powers add to Congress's expressed powers.

Implied powers, according to those that support this concept, relate specifically to the Legislative Branch, but actually all branches have some form of implied powers.

The Constitutional argument used to support their belief in the existence of implied powers is in Article I, Section 8, Clause 18, also known as the "necessary and proper clause." The clause reads: To make all law which shall be necessary and proper to carrying into execution the foregoing powers, and all other powers vested in this Constitution in the government of the United States, or in any department or officer thereof.

The language of this clause, however, actually denies the existence of implied powers, for the clause specifically states that the laws necessary and proper must be passed in order to carry into execution the foregoing powers, and all other powers vested in this Constitution.

Foregoing powers means the powers expressly granted preceding this clause. All other powers vested in this Constitution means any other powers granted by amendment.

Also notice the word "vested." Vested means "legally transferred." If the powers are legally transferred, they must be transferred from someplace. If you read Article I, Section 1 and the Tenth Amendment, it becomes apparent that the original possessors of the powers granted to the federal government is the States, therefore the laws must be in accordance with those powers granted, and any new powers must be obtained through the amendment process (Article V) which does not reach fruition until the States ratify the request with a vote of 3/4 of the States.

So, any laws passed by the federal government must be in line with their authorities from the Constitution itself, which means they cannot possess any implied powers that do not find their foundations in the express powers granted.

Those that support the concept of implied powers will also argue that Article I, Section 7 of the Constitution grants the concept of implied powers as they relate to committees, subcommittees, conference committees, limits on debate, how a law will be introduced, or any other details. The assumption is that those procedures were created out of the implied power of Congress. However, the ability for the Houses of Congress to make their own rules is not an implied power, but a specific enumerated power provided for in Article I, Section 5, Clause 2, where it establishes Congress's allowance to make their own rules of operation.

Thomas J. DiLorenzo, in his book "Hamilton's Curse," explains that implied powers were an invention of Alexander Hamilton, a federalist that believed in a more centralized governmental system. DiLorenzo wrote:

Hamilton also invented the myth that the Constitution somehow grants the federal government "implied powers." "Implied powers" are powers that are not actually in the Constitution but the statists like Hamilton wish were there. As Rossiter pointed out, "One finds elaborations of this doctrine throughout his writings as Secretary of the Treasury." The most notable articulation of this idea can be found in Hamilton's Opinion on the Constitutionality of the Bank of the United States. He wrote this report in 1791, while serving as treasury secretary. President Washington had asked both Hamilton and Jefferson for their opinions on the subject. In his opinion, Hamilton wrote that "there are implied, as well as express powers [in the Constitution], and that the former are as effectually delegated as the latter" . . . He added, "Implied powers are to be considered as delegated [to the federal government] equally with express ones." A nationalized bank, he went on to argue, was one of those implied powers.

Jefferson vehemently disagreed, arguing that the express powers delegated to the federal government in Article I, Section 8, of the Constitution (providing for the national defense, coining of money, etc.) were expressly stated because they were the only powers delegated to the federal government by the sovereign states that ratified the Constitution. Any new powers, Jefferson believed, could be delegated only by a constitutional amendment. He realized that such a doctrine as "implied powers" would essentially render the Constitution useless as a tool for limiting government if the limits of government were simply left up to the imaginations of ambitious politicians like Hamilton. . . the shock troops of the Federalist Party - federally appointed judges - would use Hamilton's arguments to essentially rewrite history and the Constitution. Thus was "liberal judicial activism" born.

. . . George Washington had condemned the notion of a "living constitution" in his Farewell Address (which, oddly enough, is said to have been at least partly ghostwritten by Hamilton). In that address President Washington said, "If in the opinion of the People, the distribution of modification of the Constitutional powers be in any particular wrong, let it be corrected by an amendment in the way the Constitution designates. But let there be no change by usurpation . . . the customary weapon by which free governments are destroyed." Hamilton's theory of implied powers ignored this warning, laying the template for generations of lawyers who would use the courts, rather than the formal amendment process, to essentially render the constitutional constraints on government null and void.

Not only were there supposedly "implied" powers in the Constitution that only the wise and lawyerly like Hamilton recognized (but that were foreign to James Madison, who like Jefferson was a strict constructionist) . . . unconstitutional powers would magically become constitutional, in Hamilton's opinion. Taken to logical ends, this argument implies that any action of the government would be de facto "constitutional" by virtue of the fact that the action occurred. This is how Hamilton viewed the Constitution - as a potential blank check for unlimited powers of government. (Thomas J. DiLorenzo, Hamilton's Curse, New York: Three Rivers Press, 2008, pages 26-29.)

-- Political Pistachio Conservative News and Commentary
Posted by Douglas V. Gibbs at 8:10 AM