Every liberal gay I have talked to supports the fact that forty years ago prayer was banned from the public school system because Christians shouldn't be cramming their religion down people's throats. . . but those homosexuals also support California's decision to make it mandatory that teachers teach gay history in a positive light because children must be taught the importance of homosexuality in our society. . . and they don't see the hypocrisy of that. . .

The gay agenda claims their free speech is being stomped on anytime a Christian shows up at a gay event carrying signs with Bible verses, and they drum those Christians out of the event. It is apparent that they expect anyone with an opposing view to be silenced.

Chick-fil-A's ownership has come out in support of traditional marriage, and the gay population, as expected, has protested, accused the company to be "homophobic" and "haters," and is calling for them to be shut down. . . but what has really happened is that Chick-fil-A's business has improved, and in fact right now sales are going through the roof.

The real regulators are the consumers. They know what they like. 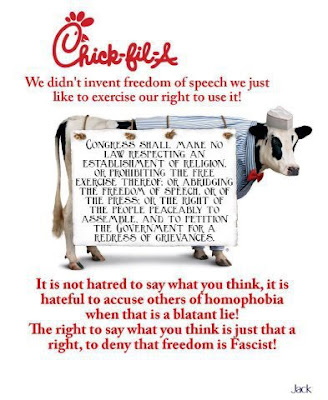 -- Political Pistachio Conservative News and Commentary
Posted by Douglas V. Gibbs at 4:53 AM

Homosexual fascists have no problem with objects being crammed down their throats - as long as it's in the right context.....

(This sinister jihad is part of the end-time "days of Lot" - coordinated worldwide by powerful unseen beings - that Jesus predicted in Luke 17. To see if you are part of this soul-damning craze, read on!)

Google “Zombietime” and click on “Up Your Alley Fair.” After recovering, Yahoo “God to Same-Sexers: Hurry Up” on the “ucmpage” listing (even Jesus told Judas to hurry up – John 13:27). Also Yahoo “Dangerous Radicals of the Religious Right.”
Read this before the predicted California earthquake happens a la Rev.16:19 (“the cities of the nations fell”) – and before hurricanes, tornadoes, droughts and other disasters occur! The fast-moving goal of Gaydom is to quietly sneak its depravity on to every Main Street on earth while normal folks stay asleep and do nothing. I wonder how soon San Francisco's underground saint - San Andreas - will get a big jolt out of the public gay porn that goes on over his head in "Madam" Nancy Pelosi's brothel district in front of children! Not one to mince words, Jesus said in Mark 9:42 that anyone hurting a child in any way deserves to be hanged and have his body thrown into the ocean!
It's far from coincidental that the more America elevates gays and senseless violence (see the predicted "days" of "Lot" and "Noah" in Luke 17), the more the cost of gas, food etc. goes up! If America is smart, it will pick up the big dust-covered book everyone owns and almost never reads - no, not the Sears catalog - and find out that the One who made the universe has some rights too! (Also Google "Obama Fulfilling the Bible.")
Gays like to say that Jesus didn't explicitly mention homosexuality. Well, when gays are about to have a birthday, they don't talk about all the things they don't want. Instead they speak positively about what they'd like to receive. In the same manner Jesus, instead of negatively listing every sexual variation and perversion that He knew mankind would invent, avoided an endless list of "thou-shall-nots" and positively stated that marriage was created for only one man and one woman. BTW, by fulfilling the same "days of Lot," gays are actually hurrying up the return of Christ as Judge and helping to make the Bible even more believable!

(Obama and his porn-protecting California friends - including Brown and Pelosi - did NOT approve of this message.)