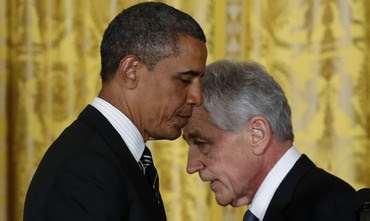 This might seem outwardly abrupt and out of proverbial "left field," but when you take a closer look at the direction in which Barack Obama is already off and running at quantum slipstream velocities, it actually makes perfect sense:

Defense Secretary Chuck Hagel announced Monday he is stepping down, leaving under pressure....

....following a rocky tenure in which he has struggled to break through the White House's insular team of national security advisers.


i.e. He was Obama's "token Republican," brought in to do his de-militarizing for him and put a "bipartisan face" on it while being pointedly locked out of "the White House's insular team of national security advisors."  Now that that job has been carried out, his imperial majesty has no more use for Hagel, and so out the RINO sucker goes, like a crumpled beer can after the last dreg has been guzzled from its interior.

During a White House ceremony Monday, Obama said he and Hagel had determined it was an "appropriate time for him to complete his service."


Yeah, kind of like Bill Zimmerman and I "determined" that August 29th, 2013, was "an appropriate time for me to complete my service" at Pacific Northwest Baking Company.  And if Hagel didn't cooperate, leaving physically intact might no longer be an assured likelihood.

Hagel is the first senior Obama adviser to leave the administration following the sweeping losses for the president's party in the midterm elections.


Which has freed O to move openly and rapidly toward his "fundamental transformation" endgame in advance of the tenuous 2016 election.  The mask of "pragmatic moderation" - or whatever stray fragments of it that were left after six years of roaring left-wing radicalism - are being gleefully cleansed away, and Chuck Hagel's grizzled cracker visage would have fit in the portrait of that revolutionary vanguard like Miley Cyrus at a convent.

It also comes as the president's national security team has been battered by crises including the rise of Islamic State militants in Iraq and Syria and Russia's provocations in Ukraine.


For whom Hagel is now the designated scapegoat, as transparent cover for the fact that even he couldn't take it any longer and called Red Barry's phony war against ISIS chickenbleep in a memo to National Security Liar Susan Rice - part of that "White House insular team of national security advisors," remember - barely a month ago.  Knowing how the Beltway, and this Regime above all, works, it's difficult not to conclude that Hagel wanted out, and did something at just the right time that would result in his "pressured resignation".  I wonder if he's learned anything from the experience, including whether it was such a good idea after all to have become "close" with the Marxist-Alinskyist tyrant when they were both in the U.S. Senate.

Nah, probably not.  I guess we'll find out if he can get his memoir to publishers before the Regime can "disappear" him.

The leading candidate to be Hagel's successor?  Michele Flournoy.....

....who is striking not because she'd be the <sigh> "historic First Woman Defense Commissar," but because (1) she's not black, and (2) she looks like if Rudy Giuliani had undergone "gender reassignment".

Supposedly she was one of the more "hawkish" members of the "White House insular team of national security advisors" under Chuck Hagel's predecessor Leon Panetta, but a "hawkish" Obamunist is more like Lois Lerner or John Koskinen.  In a national insecurity context, that designation is akin to being the most powerful hockey team in Singapore, and in practice she will be a good little sychophant who won't be passing seditious memos to Susan Rice during Obama Cabinet meetings while The One (assuming he isn't on the back nine for a change) is polishing his scepter.

Exit question: Not much, other than whether Flournoy's confirmation can be rammed through Senate Armed Services before Carl Levin has to hand the gavel over to John McCain in six weeks.  Under the latter, the questions might at least be a little more challenging, if the end result will be the same.