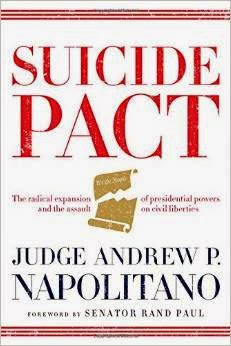 Douglas V. Gibbs hosts Constitution Radio on KCAA every Saturday at 2:00 pm, and if you saw the upcoming schedule I posted earlier today, you would have noticed that Judge Andrew Napolitano will be on Doug's radio program two Saturdays from now.

Judge Napolitano is scheduled to call into the show at a quarter after the hour after we spend ten minutes with guest John Wohlstetter.

Judge Andrew Napolitano will be on the show to discuss his new book Suicide Pact: The Radical Expansion of Presidential Powers and the Assault on Civil Liberties.

December 6th won't only be about the radio program, though.

That morning you are all invited to join the Constitution Association Murrieta Festival of Trees decorating party.  The theme of our tree is Celebration of America, at the Town Square Park in Murrieta. Bring your patriotic ornaments, and join us as we decorate a tree that will be donated to a local family.  We begin decorating at 10:00 am.

I will depart from the park at noon to co-host American Daily Review, and drive to the KCAA studios in San Bernardino for Constitution Radio at 2:00 pm to 3:00 pm.

Tomorrow we also have some fine guests, welcoming when the show begins at 2:05 pm Pacific, Dr. Paul Ruggieri to discuss Gruber's statements regarding the admission of the lack of transparency of Obamacare, and to discuss his book The Cost Cutting: A Surgeon Reveals the Truth Behind a Multibillion-Dollar Industry

At 2:25 pm, a second guest will join the program, Washington DC insider, Jerome Corsi, to discuss his new book, Who Really Killed Kennedy?  Corsi is a return guest, and best known for his book "Obamanation" when Barack Obama first emerged into prominence.