Ray Rice Reinstated By The NFL 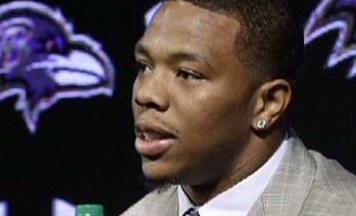 “I would like to thank Judge Barbara Jones, the NFL Players Association, my attorneys, agents, advisors, family, friends and fans — but most importantly, my wife Janay,” Rice said in a statement released by the NFLPA on Friday. “I made an inexcusable mistake and accept full responsibility for my actions.

“I am thankful that there was a proper appeals process in place to address this issue. I will continue working hard to improve myself and be the best husband, father and friend, while giving back to my community and helping others to learn from my mistakes.”

Former U.S. District Judge Barbara S. Jones, who heard Rice’s appeal earlier this month, concluded in her decision, which was obtained by ESPN, that Rice did not lie to or mislead NFL commissioner Roger Goodell.

“In this arbitration, the NFL argues that Commissioner Goodell was misled when he disciplined Rice the first time. Because, after careful consideration of all of the evidence, I am not persuaded that Rice lied to, or misled, the NFL at his June interview, I find that the indefinite suspension was an abuse of discretion and must be vacated,” Jones’ decision stated.

“I find that the NFLPA carried its burden of showing that Rice did not mislead the Commissioner at the June 16th meeting, and therefore, that the imposition of a second suspension based on the same incident and the same known facts about the incident, was arbitrary,” Jones also wrote.

“The Commissioner needed to be fair and consistent in his imposition of discipline.


As I wrote at the time:

The NFL's error in this incident was not under-reaction, but over-reaction.  Once the domestic violence charges were filed against Ray Rice, the Ravens suspended him for two games, pending the outcome of the investigation.  What they should have done is refrained from taking any premature action until the full extent of what happened was determined, as the San Francisco 49ers are doing with similarly-accused Ray McDonald.  That way, once the video above emerged, the course of action would have been obvious, and the Ravens and the league wouldn't have looked craven and reactionary in casting Rice to the outer darkness.


Judge Jones could have saved herself some time, effort, and keystrokes, and just quoted me, huh?

When the second video came out from inside that Atlantic City hotel elevator showing the one-punch knockout of Janay Rice, the NFL, cowed by the Left's attacks coming from seemingly every direction, panicked and officially ex-communicated Ray Rice.  But in so doing, they were leaving themselves open to the possibility that this knee-jerk overreaction could conceivably come back to bite them in the ass.  And now it has.  Henceforth, a "wife-beater" will be eligible to play once again in the National Football League.  And because Mr. Rice is a quality NFL running back, and NFL teams want to win, you can count on some club offering him a contract - probably not until next season, given how late in the year it is and because of the time needed for the league's latest embarrassment to, if not blow over, than at least fade a "smidgeon".  And out the window, consequently, will go the past three months of those incessant, annoying, pile-driver-like "NO MORE!" PSAs and every other frantic PR gambit the NFL has taken to try and obsequiously ingratiate itself with the feminazis who will never stop attacking professional football under any circumstances.

Nope, today really wasn't Roger Goodell's day.  Now all he's got to do is wait for news that the Ferguson "protestors" have burned down the Edward Jones Dome, and his cornucopia of calamity will be complete.