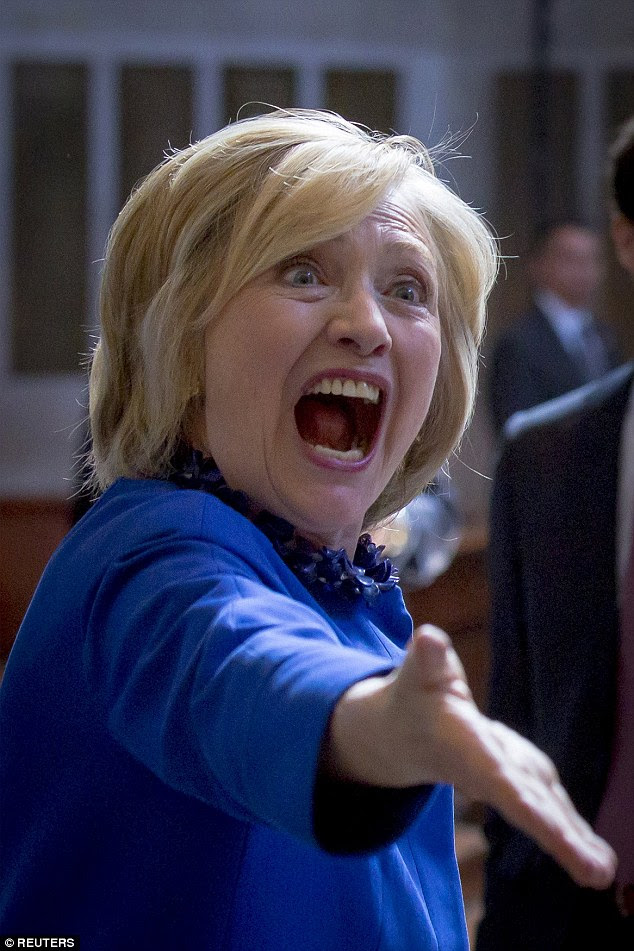 The Clintanic continues to founder and list at a whimsically entertaining rate, and now including from a frankly astonishing direction.

Everybody knows, and has always known, what corrupt, greedy, money-grubbing crooks La Clinton Nostra has always been and roaringly remain to this day.  But the scandals are piling up this week at too rapid a clip for even them to spin away.

Late last week we learned that Mrs. Clinton effectively sold a fifth of all U.S. uranium reserves to the Russians.

On Monday, Charity Navigator refused to even rate the Clinton Foundation on transparency (reasonable, as it's awfully difficult to evaluate something that doesn't exist), and put it on its watch list of problematic "charities.”  Meanwhile, Bill Allison of the Sunlight Foundation called the CF "a slush fund for the Clintons," and it was unearthed that the portion of its receipts actually going to charitable expenditures was a big, fat 6.4%.

On Tuesday it emerged that Bill Clinton personally profited from speeches sponsored by thirteen mega-corporations or trade associations that were also lobbying Hillary Clinton’s State Commissariat.  And remember, per Mrs. Clinton's own words twenty-three years ago, that she and The Big Me are a "blue plate special".

Yesterday none other than National Pubic Radio reported that Her Nib, to quote Ace, "sen[t] out not Susan Rice as a human shield to lie for her [claiming that an independent watchdog rated the Clinton Foundation "among the world's most transparent organizations"], but her own f***ing daughter."  Which just goes to show that the fruit really don't fall far from the tree.

And today, none other than the New York Times AND the Boston Globe disclose that the CF used a "byzantine organization" to hide the sleazy connections involved in the aforementioned Uranium One-Rosatom "deal,". which was a followup to what the Washington Post spilled yesterday.

All of which brings us to the story that actually interests me and is prompting this post:

A handful of deep-pocketed donors are reconsidering their gifts to the $2 billion Clinton Foundation amid mounting questions about how it’s spending their money and suggestions of influence peddling, according to donors and others familiar with the foundation’s fundraising.

One major donor who contributed at least $500,000 to the foundation last year said a 2015 donation is less likely because of revelations about sloppy record-keeping and huge payments for travel and administrative costs.

“There are a lot of factors and the reputational is among them,” said the donor, who did not want to be identified discussing philanthropic plans that have not been finalized. “We had some questions about how the money was being spent — and that was long before the problems were in the press.”

At least three other major donors also are re-evaluating whether to continue giving large donations to the Bill, Hillary & Chelsea Clinton Foundation, according to people familiar with its fundraising.

They say increasing financial pressures and escalating outside scrutiny have sparked sometimes intense internal debates about the priorities and future of a pioneering charitable vehicle that was supposed to cement the family’s legacy.


If donors to the Clinton Foundation are getting skittish, if even the "bluest" of media outlets are actually conspicuously reporting on the cesspool and ongoing criminal enterprise that is everything Clinton, you can count on the purported $2.5 billion projected "Ready For Hillary!" warchest being in mounting jeopardy as well.  Because whatever lefties still claim in public, they do not want to be "presumptively" stuck with a candidate and nominee who cannot effortlessly spin away endless scandals, whom the public doesn't like and trusts even less, and who, plainly and simply, cannot win.

In a cycle where acute Obama fatigue has already set in, a carpet-bombing of preemptive Clinton fatigue that never really went away over the past fifteen years is not a winning Democrat formula.  It will not take the Donk rank & file long to come to terms with it and adjust their preferences accordingly.