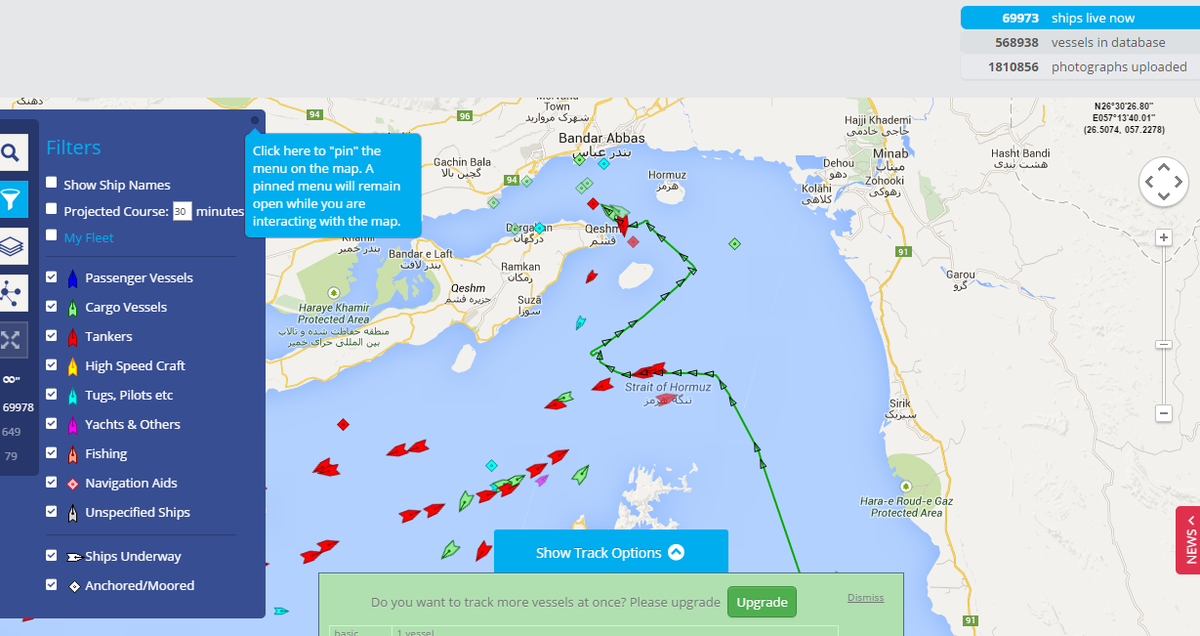 Rather reminiscent of the "Tanker War" of the 1980s, when, during the Iran-Iraq War, both sides took to attacking neutral shipping in the Persian Gulf to deny the other its oil export capabilities and force them to surrender in the stalemated struggle on land - except for the fact that back then, the Iranians refrained from attacking the United States (which had begun re-flagging Kuwaiti oil tankers at the latter's request) directly.

That has now changed:

Iranian patrol boats intercepted a cargo ship in the Strait of Hormuz on Tuesday and forced it into Iranian territorial waters by firing shots across its bow, prompting the U.S. Navy to send a destroyer and reconnaissance plane to "monitor the situation".


Not stop the Iranian patrol boats and warn them off, but just sit there and watch.

Iranian Revolutionary Guard boats confronted the MV Maersk Tigris, a Marshall Islands-flagged vessel, as it was traversing one of the world's most important oil shipping channels and forced it to divert toward Larak Island near Bandar Abbas, where it was boarded by Iranian forces, U.S. officials said . . .

Alerted by a distress call from the Maersk Tigris, the U.S. Navy dispatched the destroyer USS Farragut toward the scene as well as a reconnaissance aircraft, the [Obam]agon said. Army Colonel Steve Warren said firing shots across the bow of a cargo vessel was “inappropriate” and seemed “provocative.”


"Inappropriate" is when you tell an off-color story at a church picnic.  This was piracy.  Which is a lot more than "seemingly" provocative.

The incident came just four days after Iranian patrol boats surrounded a U.S.-flagged vessel, the Maersk Kensington, and followed as it was in the same area, a U.S. official said. No warning shots were fired in that incident.

U.S. officials said they were concerned and monitoring the situation, but an initial review indicated the United States did not have a legal obligation in a maritime environment to defend a Marshall Islands-flagged ship with no American crew. [emphasis added]


You can see the thread-bare degree of separation at play here.  A U.S.-flagged vessel they "follow" threateningly, while a Marshall Island-flagged ship they seize outright.  But the difference really is no difference, as the Marshall Islands are a "free association" American possession, and thus there's no functional pretextual difference between the two situations.  But because there was a legal technicality to hide behind as a flimsy excuse to do nothing and let the Iranians have their way with us, that is the option the Obama Regime took.  Indeed, the White House appears to be recognizing Iran's claim to the Strait of Hormuz (the entrance to the Persian Gulf) as being their territorial waters, which would mean nobody could ever legally enter the Gulf at all, a claim that no country, including ours, has ever recognized.  Until now, apparently.

According to al Jazeera, the Iranians have since released the MV Maersk Tigris, but that doesn't mean the crisis is over and all is well.  This is classic Iranian envelope-pushing.  Seeing as how The One has green-lighted their nukes, they're probing on all fronts to see if the U.S. has a challenge line left at all.  And, of course, it could be a setup to goad us into moving major naval assets into the Gulf in order for them to destroy them.  What the mullahs are confirming is that there is no action, no matter how "provocative," that will motivate Barack Obama to oppose the mullahs' aggressive imperialist expansion.  How bad is this apocalyptic dynamic becoming?  It's rendering the nuclear "deal" all but irrelevant, a symptom at best of the bigger problem.

Which begs the question: What happens when the mullahs seize a U.S.-flagged ship?  And start shooting at any U.S. warships that are dispatched to intervene?  And perhaps sink one or more of them?  In other words, at what point will the American people start demanding active "direct" opposition to Iran, and how much public pressure will it take to force Red Barry's hand?  And is that even possible?