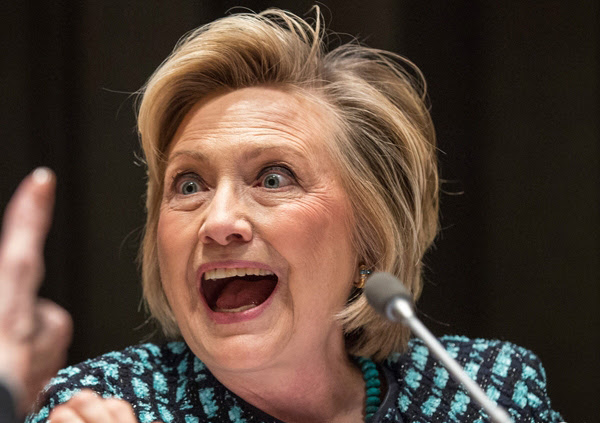 I'm no clinical psychiatrist, nor do I play one on TV, nor did I stay at a Holiday Inn Express last night, so I'm not venturing any kind of professional diagnosis, but I'm hard-pressed to come up with any alternative explanation for this:

“I have seen pictures from them and obviously find them disturbing,” the Democrat presidential hopeful said during a sit-down interview Tuesday with the New Hampshire Union Leader.

“Planned Parenthood is answering questions and will continue to answer questions.

“And if there’s going to be any kind of congressional inquiry, it should look at everything and not just one (organization),” she said. [emphases added]


Oh, I see the method to her madness - Planned Parenthood's cannibalistic profiteering can't be spun, so gather a crowd around them and enable them to get lost in it until the focus dissipates in the usual media-fueled "partisan bickering" and they can make their escape.  Which I must admit is not beyond the boundaries of the possibilities of Republican stupidity.  Since Planned Parenthood is not, in reality, in any more jeopardy of either criminal prosecution or losing their half-billion in a year in federal subsidies than Hillary herself is of criminal prosecution over her email caper, I'm sure that, to the extent that her senility is allowing cognitive thought processes at all, she thinks this is an opportunity to "reach out" to, you know, the normal people she's been studiously and imperiously ignoring in her increasingly frantic efforts to convince the Nutroots that she's still as big of a radical extremist freak as they are.

Problem is, normal people hate her slimy, flabby guts and always will, and she isn't close to even opening those aforementioned negotiations, much less sealing that deal.  It is, in other words, madness- and nausea-inducing PR optics for a "Democrat frontrunner" whose campaign is in cascade failure collapse.  Think about it: The Queen of the Feminazis, the woman who is running on her vagina and nothing else, has now called for the criminal investigation of the entire abortion industry.

You know how we keep saying, "Now we've seen everything?"  We haven't exhausted that motherlode of incredulity, but Hillary Clinton indicting the baby killers indicates that we may finally be getting close.